Many visitors to Arashiyama would stop at the Togetsu-kyo Bridge, and looking into the distant forested mountains, would wonder what lies beyond the other side. Now you can take a scenic sightseeing train, known also as “Torokko” in Japanese, to the resort town of Kameoka.

In late March and November, this is a particularly popular ride, as you can see the cherry blossoms and autumn foliage. Many passengers also take the train up and return by the boat down the rapids, also known as the Hozugawa Kudari. It is amazing to reflect that they used to send logs down this river a long time back, which is a real feat of navigation.

As you wind your way through some of the longest tunnels in Kyoto, spare a thought for the engineers and builders who hacked their way through steep mountain forests, in building the train line from the former imperial capital of Kyoto to the Port city of Maizuru in the 22nd year of the Meiji Period (1889). Some of the original French bricks used can still be seen from the train.

To prepare you for the 30 minute trip, the Kyoto terminus of the train in Saga Arashiyama station has several model train displays as well as a plethora of train souvenirs, such as a DVD of the train ride, or coins with train emblems on them. This, along with Kyoto station, is a trainspotter’s paradise.

In other times of the year, you can also enjoy wisteria blooms and vivid green bamboo groves, and the view is particularly dramatic as the train line hugs the cliff face above the river gorge.

For children, there is a costumed character which you can take photos with, or there are also professional photographers who would take capture your beautiful memory for a fee.

You can also alight halfway at Hozukyo Station and stroll around the national park like surroundings. The train stops for a few minutes, so either stroll quickly or ask the attendant beforehand if you can get on the next train an hour later.

Tickets for this train are sold daily on a first-come, first-served basis. You can change your ticket before departure, though for refunds, there is a refund fee is 210 yen. Don’t miss the train, as you cannot refund your ticket. You can also make a reservation up to one month in advance in the "Green Window" booking counter of all major JR West railway stations, like Nijo, Kyoto, Uji, Nara, Shin Osaka, Osaka, Sannomiya, Kobe, Tennoji, Himeji, and Kansai Airport, as well as most major travel agencies throughout Japan. If you have booking group tickets for groups of 15 or more, you can do so between two weeks and one year before the departure date.

My inside tips for enjoying the Torokko: 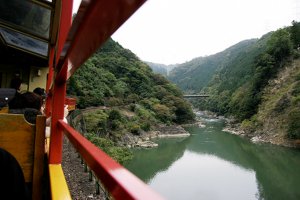 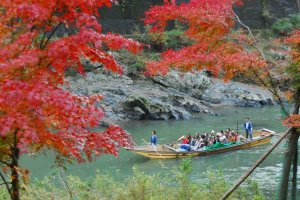 Victoria Vlisides 6 years ago
Would love to visit here!
Reply Show all 0 replies

Jihad Mahmoud 6 years ago
I would love to try this. But how much is the ticket?
Reply Show all 1 replies

Bonson Lam Author 6 years ago
From Arashiyama to Kameoka, the one way fare is 620 yen for adults and 310 yen for children. It operates from March to December, except on Wednesdays. If Wednesday falls on a public holiday, then it would operate on Wednesday but not on a Thursday. You should really try it!