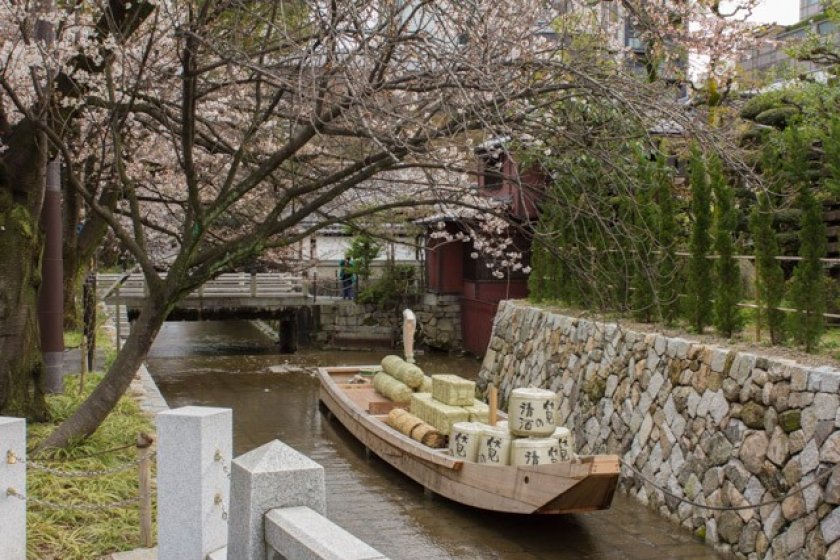 This small port is called the Ichi-no-Funairi, and is one of the nine sites between Nijo and Shijo streets where cargo was loaded or unloaded. This is a replica of the original boats that were used in those days

One of Kyoto’s favorite Cherry blossom spots is this picturesque street along the Takase River in the heart of Kyoto! You can walk and enjoy the cherry trees along the embankment all the way from Nijō-Kiyamachi to Jujo dori, although that would be quite a walk. The main part is between Sanjo Dori and Shijo Dori. There are many bars, restaurants and shops in this part of Kyoto, and with a bit of patience you can spot some Maiko strolling along in colorful kimono.

The history of this small canal and street go back many years. In 1586, Toyotomi Hideyoshi ordered the wealthy merchant Suminokura Ryoui to dig a water way that would bring material for construction (stone) from a port in Fushimi to Kyoto. Working with his son, Soan, in 1614 Suminokura Ryoui opened a canal that ran from the first pier (Ichi-no-Funeiri) near Nijo Street to Fushimi. This canal was called the Takasa River and it became an important transport link, carrying rice, timber, fuel wood and other important merchandise to Kyoto until it was taken out of service in 1920.

Kiyamachi Dori was also the home to the Kaga and Tosa Clan Residences, influential feudal lords from the Edo period. Drama unfolded in this street in 1864 and 1869, when Ōmura Masujirō and Sakuma Shōzan were assassinated. Both these men were in favor of opening the country after decades of being in isolation.

On a more upbeat note, one of the buildings along the canal is the birthplace of the Japanese motion picture industry! In 1897, Inabata Katsutaro showed the first experimental film in Japan. Inabata had visited Paris in 1896 to see the Paris Exposition and returned with a cinematograph he obtained from the famed French inventor Auguste Lumière. The following year, he showed the first experimental film in Japan in the garden of the Kyoto Dento Co. Ltd.

A large stretch of the Kiyamachi Dori is illuminated at night and whether or not its cherry blossom season or not, there is always lots of commotion here!

So come and enjoy it; it' a part of Kyoto that I am sure you will love! 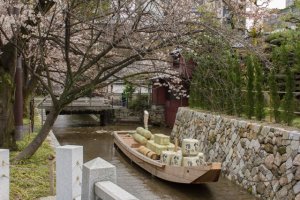 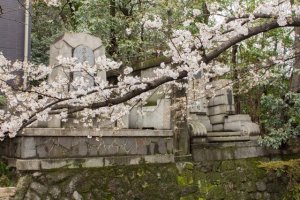 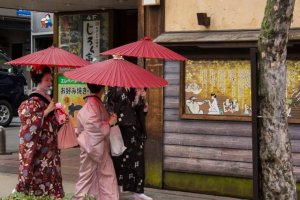 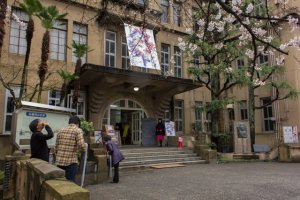 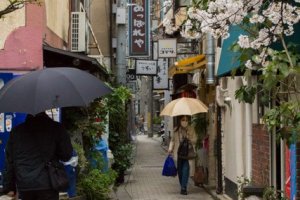 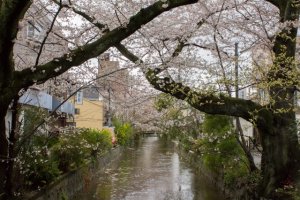 Tomoko Kamishima 8 years ago
I enjoyed this article, Hugo! It must have been a really big project for the Suminokura Family, even if they were millionaires. But thanks to them, today we can enjoy this beautiful riverside walk.
Reply Show all 0 replies
2 comments in total