Experience a tour through historic Kyoto with a samurai

Having worked as a driver for nine months in the United States 58 years ago, the last thing Joe Okada expected to do was become a katana-wielding tour guide.

Dubbed “The Last Samurai of Japan”, Okada is Japan’s oldest active tour guide at the ripe age of 89. He started off as a regular tour guide before heading to Los Angeles in 1960 to improve his English at night school. While his career spans 56 years, Okada only picked up swordsmanship around 35 years ago and has gone on to slice up hundreds of fruit and vegetables.

“Anyone can introduce Japanese tradition, but samurai skills are not easy – it’s an art,” said Kyoto-based Okada, whose tour’s highlight is cutting a watermelon that is placed on a tour member’s stomach.

Okada had worked in a tour company for five years when he first stepped into the industry, but his ambitions grew and he decided to create his own tours.

Before Okada started using the katana, he had already adopted the samurai theme for his tours, hiring a professional swordsman to perform stunts and renting out smaller castles for his tours. Unfortunately, Okada’s hire injured himself and the veteran had to continue his show on his own the next day onwards.

“I managed to show something the tourists enjoyed,” said Okada, who mentioned that the sword was a way to “surprise and entertain”.

However, his job was not always smooth sailing. Okada is not shy to admit that his slicing had left a tourist needing some stitches. He explained that because she could not stop laughing, the watermelon – which would have absorbed the blade’s impact – fell off her stomach, resulting in a cut.

“I will not hide anything; I always tell this story before my tours. And the lady and I became good friends after that,” said Okada.

Okada’s current tour started six years ago, bringing tourists from Kyoto City Hall to quaint shops along the way that specialise in calligraphy, paintings, and jewellery – the shop owners are so familiar with him that it’s routine for them to entertain his tour groups occasionally. The five-hour tour then rounds up with his samurai show at Shimogoryo Shrine, before ending at Kyoto Imperial Palace.

Okada currently guides 50 regular Saturday walking tour a year at 4000 yen, and 50 semi-private tours on weekdays (guide fee 40,000 yen). Joe remains vigorous and shows no signs of slowing down, having never cancelled a tour before.

“I want to continue (to work) until I die,” said Okada. 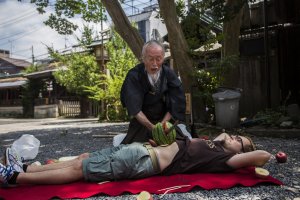 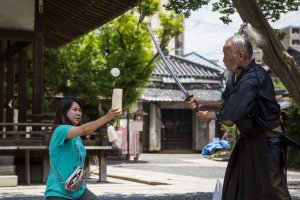 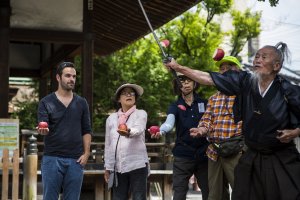 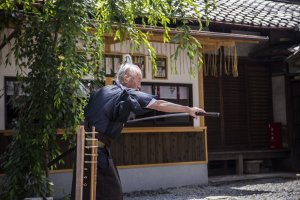 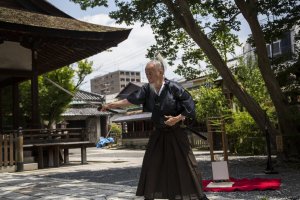 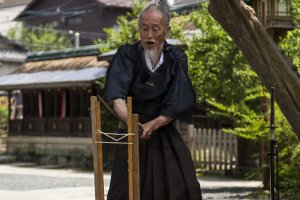 Jean-Paul Willis 2 years ago
I met Okada-sama in the streets of Kyoto last year.
What a nice person! A real gentleman.
Had a great chat about #omotenashi (my passion)
Reply Show all 0 replies

Renford Esau Sinangote 4 years ago
Amazing skills! Joe Okada is worthy of respect and admiration. I'd take the tour just to see him perform.
Reply Show all 0 replies

Kim 4 years ago
This looks fun! Although, I think I'm too intimidated to go down the watermelon trick path!
Reply Show all 0 replies
3 comments in total