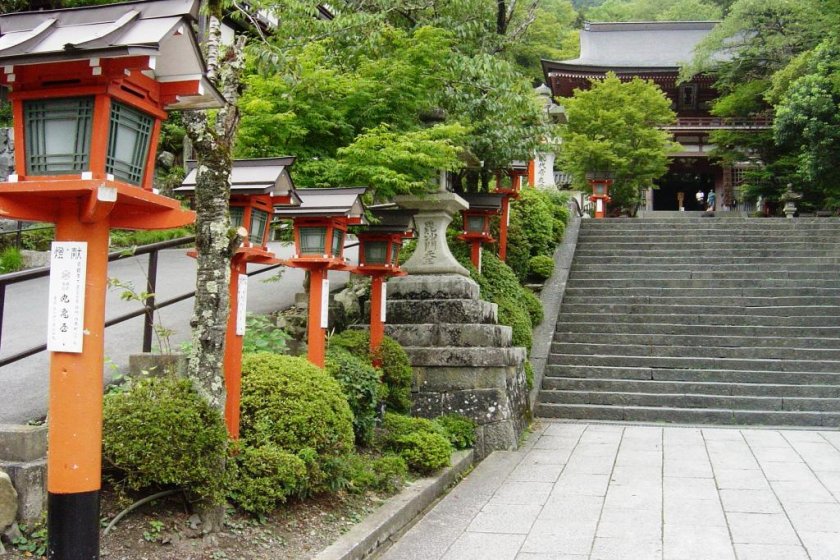 A tale of mountain goblins, samurai and a Reiki Master

Flight of stairs leading up the temple gate of Kurama Temple

The train from Kyoto slowly winds its way uphill, on the way providing visitors with some pretty views of the Kyoto countryside. This journey is nicely setting the mood for a day in Kurama, a small mountain village north of Kyoto.

Upon arrival at Kurama Station, the visitor is greeted by statues of tengu. These are Japan's mountain goblins which feature disproportionately long noses.

Tengu are said to have supernatural powers, a mischievous sense of humor and excellent fighting skills and they feature in many of Japan’s folk tales. What's more, they are said to dwell in the Kurama Mountains.

One of them has become famous in the world of humans. In fact, it is the the King of the Tengu, Sojobo, himself. He is described as white-haired and ancient-looking, no wonder, he must have lived for centuries.

What made him famous was the fact that he took on a disciple and trained him in swordsmanship, the martial arts and military strategy. This disciple was none other than samurai Minamoto Yoshitsune, a general of the Minamoto Clan in Japan's 12th century. His fighting skills have become legendary in the history of Japan.

Don't let this tengu talk put you off though. On my several visits to Kurama I have not seen one except for those in front of the station.

Passing the souvenir stalls around the station, the pathway leads through Kurama Village with its picturesque, old farm houses, and eventually reaches Kurama Temple.

It was founded in the 8th century by a Chinese priest and until 1949 the temple was connected to Tendai Buddhism, one of the schools of esoteric Buddhism in Japan. However, now it is headquarters of Kurama-kyo, an independent school of Buddhism that is nature-centered.

The main temple building is located on a mountain slope overlooking a valley but before you can enjoy the nice view from there, you have to climb hundreds of stairs.

From the village a flight of stairs lined with red-lacquered wooden and grey stone lanterns is leading the way up to the Niou Mon (Gate of the Guardians) that is the entrance to the temple grounds. In typical fashion, grim-faced guardians make sure that no ill-intended people pass through.

Once you have passed through the gates, more stairs are awaiting you. You will pass by a number of temple buildings until you reach the honden, the main temple building.

The object of worship here is a trinity of gods, called Sonten.

In front of the honden is the hiroba, a large square, and a terrace from where there is a good view over the surrounding mountain landscape.

The nice view might distract you from looking down. In the middle of the square, a symbol is carved in the ground. It consists of a pentagram within a circle within a square. This is said to be a power spot!

Walking up all the way will take about 40 minutes but there is an alternative for those who feel lazy or are not good on foot: you can ride half-way up by cable car!

If you are interested in alternative healing, then you might have experienced Reiki treatment, a form of hands-on energy healing.

Did you know that Kurama Mountain is the birthplace of Reiki?

Usui fasted and mediated near a massive cedar tree, called Osugi in Japanese. In Shinto Religion these old, massive trees are worshipped as kami, the deities in Shinto Religion. On the last day of his training Usui had a revelation about Reiki.

Kurama Temple seems far away from Kyoto and some people might think that it less important than the many famous temple's in Kyoto's city center.

However, Kurama Temple is actually situated at a strategic position. It guards Kyoto, once capital of Japan, against evil from the north.

Kyoto, like Edo (now Tokyo) later, had a temple in each direction of the compass, designated by the then Emperors, to protect the city. Guess what, these temples still carry out their protective tasks today!

On the grounds of Kurama Temple you will also find Yuki-jinja, a Shinto Shrine, that hosts the Kurama Fire Festival (hi matsuri) each year on the night of October 22nd.

Until Buddhism and Shintoism were forcefully separated by the Meiji Emperor's degree, they co-existed for many centuries. In fact, one can still see in many places that a temple and a shrine are located in the vicinity of each other and Japanese worshippers would visit both quite naturally.

Behind the main temple building, a hiking trail across the mountain to Kibune Shrine starts.

Whether you believe in all the stories and mystery surrounding Kurama Temple and Kurama Mountain or not, at least you will be able to experience the temple's nice setting in nature away from the crowds of central Kyoto. 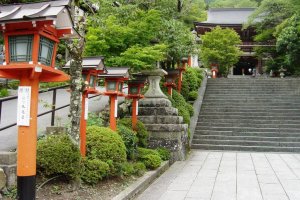 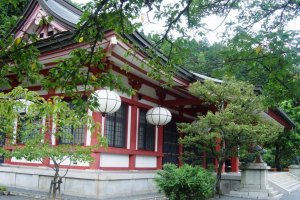 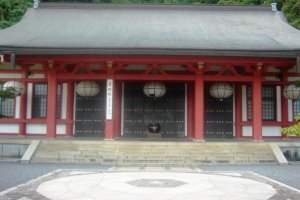 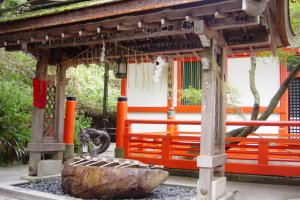 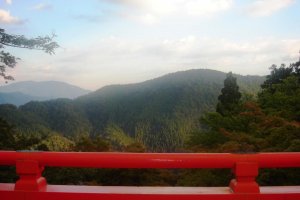 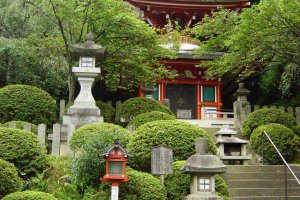 Elena Lisina 2 years ago
The temple looks too new for being 13 centuries old!
Reply Show all 0 replies
1 comment in total