Premium food shopping in the heart of the city

Want an eye-popping and mouth-watering Japanese food experience? I recommend braving Kyoto's 400 year old Nishiki Market – 390 metres of food and kitchen ware shops in a narrow arcade. It's popular with tourists, local gourmands and chefs so go early – it opens at 9 am.

Typically Japanese, it’s immaculately scrubbed with meticulous displays as delectable as the goods. Many of the roughly 130 shops have been run by the same family for generations. Like Tsunoki, a sake shop more than 200 years old which sells an unusual sparkling cloudy sake called "nigorisake".

Packed with pristine produce, the market is strangely scentless, bar the astringent aroma of "tsukemono" (pickled vegetables). Outside of Japan, these can be measly, factory-made ginger slices, dyed lurid pink, served with sushi. Here, there's an artisanal, kaleidoscopic bounty. Eaten at breakfast, lunch and dinner, they are as treasured as rice.

Honored in religious rites since ancient times, rice commands reverence. Over 500 varieties are grown in Japan. A luxury in the 11th century, eaten as rice balls at royal picnics; today, it’s the core of most meals.

There’s copious seafood – beloved in this nation of islands. Buddhism’s influence and largely mountainous terrain unsuitable for raising livestock meant most Japanese did not eat meat until Westerners introduced beef in the 1860s.

Japanese knives have gained fans around the world. Internationally renowned chefs visit Aritsugu, open since 1560 and a former sword supplier to the Imperial Palace. Demand for swords fell during the peaceful Edo period (1603-1868) and from the 1860s as samurai were outlawed, so sword makers turned to handcrafting knives.

Alternately enticed and repelled by the barrage of familiar and alien, I balked at some of the more exotic delicacies.

Fuka is over 300 years old and sells dense, gelatinous "fu", wheat gluten mixed with rice flour. Fresh "namafu" can be simmered, fried or grilled. Classic flavors like pumpkin or sesame sit with the newer bacon, basil or cheese.

By lunchtime, the aisle is a monstrous, undulating millipede of shuffling feet. Swallowed one end, disgorged the other, I emerged impressed by the breadth of local and Japanese cuisine.

Hordes of travelers surge through Kyoto’s dainty streets in search of temples, shrines, gardens and a serene, contemplative beauty that might be lost forever. Look down from Kiyomizu-dera temple’s hillside platform – where monks once gazed upon battles below – at a scrum wielding selfie sticks in place of swords.

The 2020 Tokyo Olympics are coming. How will the Japanese experience change? You can mourn the loss of a nebulous ‘real Japan’ or watch in fascination as the country morphs, adapts and rebrands. Science fiction author Philip K. Dick once wrote, “Reality is that which, when you stop believing in it, doesn’t go away.”

Nishiki Market should hold its place. It’s a piquant stew of traditional and contemporary gastronomy with proud establishments, centuries old, that should withstand the tourist assaults of the future.

Open daily from 9 pm-6 pm dependent on each store. Some stores close Wednesday or Sunday.

Enjoy this? Visit my website Bites of Oishii http://bitesofoishii.com for more travel, culture and food stories. Oishii ("oy-shee") is Japanese for delicious! 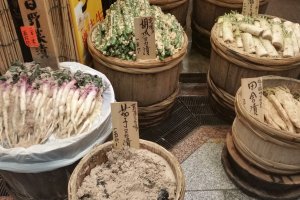 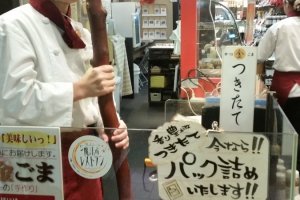 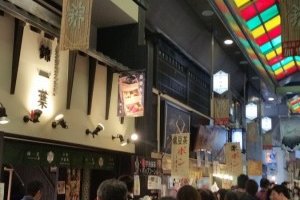 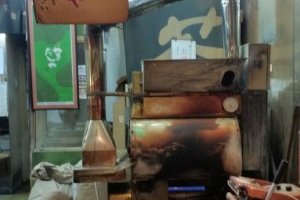 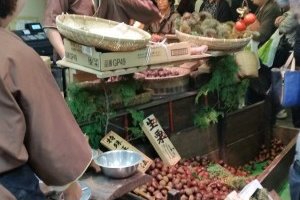 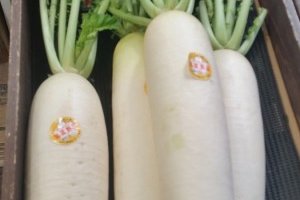 Nishiki Market runs parallel to Shijo Avenue, one block north of Shijo Avenue and west of Teramachi Street. It's a three-minute walk from Shijo Station on the Karasuma Subway Line (four-minute ride from Kyoto Station). (Directions)