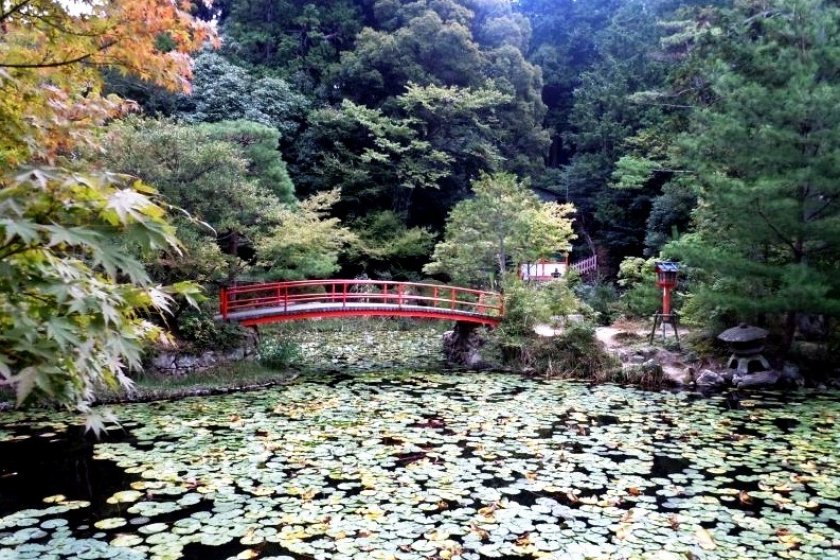 Was Kanmu running to save his life, or was there a desire for something greater, the need to create a new Jerusalem? It was the year 784 AD, but Kanmu was no ordinary man. He was the emperor in the fledging capital city of Nara. Whether real or imagined, Emperor Kanmu feared for his life. His future was clouded by shadows as he walked down the corridors of his palace. Were his rivals going to take him away from his throne? What about the clergy? They didn’t see eye to eye and he wanted some space, away from their growing influence.

Whether it was true or just his imagination playing on his mind, there is one thing that he is sure of. He had to move. Nagaoka Kyo wasn't on the map in 784, but it was definitively on his mind. A new world where the emperor would rule in peace , where old rivalries and the loose talk of the meddling priests will no longer cast a shadow on his reign.It would take days to travel by foot from Nara crossing many rivers and hills, one that will clear his mind and give him a vision for the future. He may as well be traveling to a new world.Yet relocating the capital was no light decision, with thousands of servants having to move and costs that would baulk the royal treasury. Wasn’t it decided just 70 years ago to stay put in Nara? Hoping for Divine blessing Kanmu founded Oharano shrine, in the hills above Nagaoka Kyo. Then in 785, disaster struck. Fujiwara no Tanetsugu, the administrator for the new capital was assassinated. Now, even what was sure became uncertain. Should the capital be moved here at all? Wanting to start again, he moved again, this time to Heian-kyo, home of present day Kyoto.

In some ways, this move had saved Oharano shrine. While the many parts of Kyoto raced towards modernity, this little known shrine sits preserved in a 20 acre forest, filled with mature maple trees that transform the hills each autumn. You can almost imagine Emperor Kanmu thinking as he strolled these forests, and the shrine was made famous in both the Tale of Ise and the Tale of Genji. Nevertheless, there are links to the former capital of Nara, including statues of deer in the temple grounds.

Tips on getting here: There are only a few places to eat around the temple, so it is good idea get some food near the station before taking bus. There are some cafes in the Aeon Mall Shopping Center just two minutes walk north west of Higashi Muko Railway Station, with take out or eat in lunch or snack menus, as well as a specialty tea stand. They also have a massage clinic, just in case you wish to relax there after the walk. Muko is on the main Kyoto railway line between Osaka and Kyoto, with trains every 10 minutes taking the 10 minute trip to Kyoto, whose modern station is a world away from the quiet charm of Muko.

Take route 63 or 65 bus from JR Mukomachi Station or Hankyu Higashi Muko Station Bus Stand 1 to Minami Kasuga-cho bus stop. The first bus operate from 707 am and generally every hour at 12 minutes past the hour. It takes 20 minutes from Higashi Muko to Minami Kasuga cho, from there it is a short walk to the temple gates. 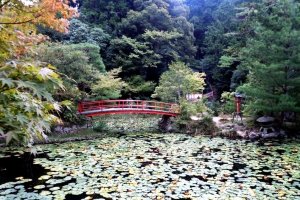 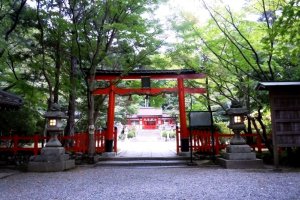 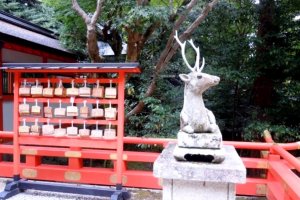 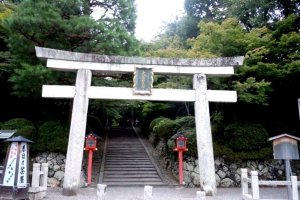 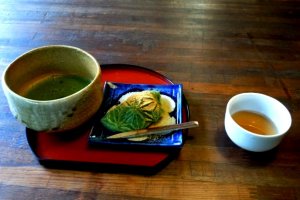 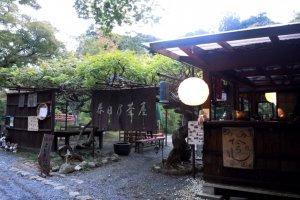