A story of mind numbing adventure

Let me introduce the 3 Blind Mice motorcycle touring club founded in Osaka, Japan in 1993 by one Scot, one Aussie and an Englishman; none were blind nor mice, but read on.

The Aussie, Steve “Leave it-be”, has now ‘left the building’ i.e. returned home to his native land. The Englishman, Mike-sensei, worked in almost every university in the Kansai region in the ’90s. His whereabouts are now unknown. And the Scot, Jules “Big W”, remains in the land of twisting turns, 1000-year old Buddhist temples and some of the friendliest bikers on Earth.

The children’s nursery rhyme was an appropriate name as none of us knew where we were going, we couldn’t read Japanese kanji road signs and thus often got lost, but we sure didn’t want our ‘tails’ chopped off by our 3 new Japanese wives. So early on Saturday morning once a month and public holidays too it was ‘see how they run’ as our 3 ‘gaijin’ (foreigner) bikers headed out of Osaka north, south, east or west to explore this wonderful country beyond the teeming metropolis of the Kansai Big 3 cities- Osaka, Kobe and Kyoto

Leave-it-Be rode a black Honda VTF 250cc road bike, small yet powerful enough for Japan’s busy roads and tight mountain turns. Big W, in contrast, rode a bright red Ducati 900cc Italian racing machine. Very good looking, but very temperamental and often in the workshop. Mike-sensei had an old TT Yamaha 175cc dirt bike. Slow, but reliable, especially on the odd narrow country road with potholes and very rough edges. Our first recruit to the 3BM touring club was Hiro on a beautiful, black Kawasaki ZZR 1200. Very fast, very smooth and immediate power delivery, like being perched on top of the Aussie racehorse, Black Caviar. Hiro was only 155cm and weighed about 60kg. He even looked like a jockey on his handsome steed.

This is the tale of one 3BM weekend trip up to Kyoto and around Lake Biwa, a distance of about 300km in total (see map) We met at the Royal Sun, a family restaurant, for breakfast at 7am in Suita, northern Osaka on a cold late-March Saturday morning. We had tents and sleeping bags strapped on the back but were unsure about camping at the end of Japan’s harsh winter season. The bike’s engine provides some warmth as you ride but your hands and feet will go numb if you don’t have the right protection. It took some time to get across to northern Kyoto and out of the city traffic. Japan has an excellent highway network, but you pay by the km and we often avoided it to save Yen and see more of the local scenery.

The ride up the west side of Lake Biwa is pleasant. You get great views of the lake, easily Japan’s largest, where black bass recreational fishing goes on and mock paddle steamers take tourists for green tea and fresh sushi cruises (equivalent to our coffee and cake cruises on Sydney Harbor) The mountains are always nearby when touring in Japan, and they do rise majestically from the shoreline in a few places. But mostly there is a 2km strip on the west side of Biwa Ko and greater than that on the east where more people live.

We camped in a disused railway tunnel right at the tip of the lake. It was a bloody cold night and we were grateful for our -5 degree Celsius rated sleeping bags and the bottle of Irish whiskey Mike-sensei had tucked in his tank bag plus the welcome fire which threw eerie shadows on the tunnel walls but kept away any dangerous animals. Not that the forests near Lake Biwa are known for ferocious black bears, more like a few noisy black bats.

Riding down the east coast of the lake you come to Hikone Castle. This is a small, but magnificent example of traditional castle design. Built between 1602 and 1622 by the daimyo (feudal lord) Naokatsu. Hikone Castle has a wide moat around it, a narrow wooden staircase to the third and top level of its castle keep and wonderful views of the surrounding rice paddies and the city of Hikone, and even the lake. It’s one of only four castles in Japan designated a national treasure for its architectural merit (the others being Inuyama, Matsumoto and Himeji), and the fact that it is original.

Travelling south from Hikone you reach Maibara, known only for its shinkansen (bullet train) stop on the way to/from Kyoto. We didn’t stop at bridge which bisects the southern tip of the lake as we had to beat the Sunday afternoon traffic. We always said the disappointing fact of a superb weekend‘s touring in Japan was having to return to the narrow, crowded streets and laneways of Osaka. But you can’t have everything your way, and we had had another Great 3BM ride. 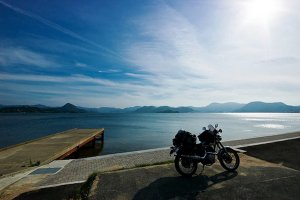 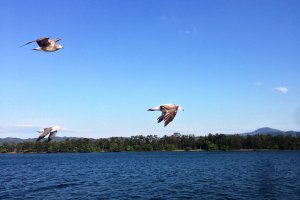 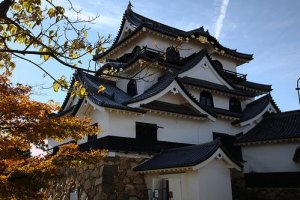 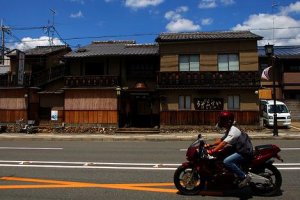 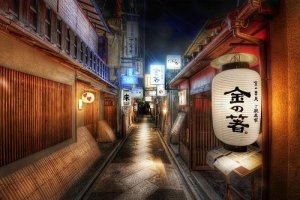 Bonson Lam Author 9 years ago
How did three crazy foreigners got to Lake Biwa and survive sleeping in an disused train tunnel at Lake Biwa! Here's to Aussie spirit on Australia Day!
Reply Show all 0 replies
1 comment in total