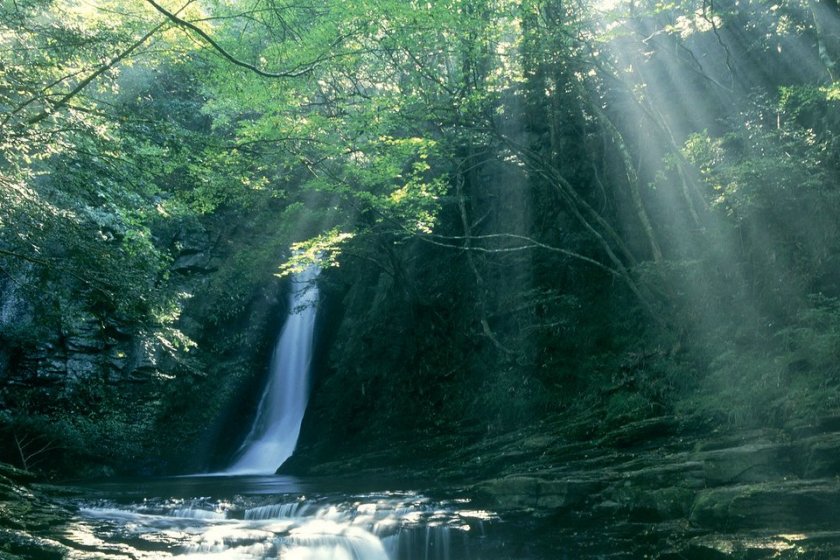 And the Giant Salamander Museum

Ranked at the top of the list of the Best 100 Waterfalls of Japan is the Akame Shijuhachi Taki, 48 Waterfalls, a spectacular series of breathtaking cascades of up to 30 meters high, located in Nabari in the picturesque Iga region of Mie Prefecture, west of the capital, Tsu and bordering Nara Prefecture. The falls can be seen close up by following a four-kilometer hiking trail through some of the most spectacular natural scenery, lush mountain greenery, ancient forests, clear mountain streams and stunning waterfalls you’ll ever see.

To really enjoy the falls at a leisurely pace, set aside at least three to four hours. You’ll also want to visit the Salamander Center at the entrance way to the hiking course. The small information hall come aquarium features the giant Japanese salamander, which can be found in the river along the hiking path. These salamanders with a life span of 50 years rarely leave the cold, swift mountain streams and can grow to one and a half meters in length, and weigh up to 25 kilograms. The salamanders are a disappearing species, as disease and urban development harm their existence in the mountains of Japan. See and learn about these rare animals and then know what to look for along the path.

There are a number of locations around Japan calling themselves The Forty-eight Waterfalls, however this was a much used phrase in old Japan to denote a large amount, rather like our “101”.

In fact there are not really 48, but just over 25 main falls along the hiking trail at Akame, and plenty of smaller falls along the streams. Of those, the most impressive five are;

The Fudo Falls, close to the entry and named after the Mantra God, Fudo Myo-o, features a seven meter wide cascade with a 15 meter high drop, into a ten meter deep pool. A bridge over the ravine provides the most magnificent view of this amazing waterfall.

Being surrounded by a stunning tree lined rock formation, one of the most distinct falls is the beautiful Senju Falls, so named because the tumbling water splashes resemble the thousand hands, or sen-ju, of the Senju Kannon Goddess of Mercy. The Senju Falls have a 20-meter deep pool below the 15-meter high and four-meter wide cascade. From the Salamander Center, expect a 20 minute walk.

Resembling a long flowing cloth draped over the smooth worn stone, one of the most elegant and highest falls at 30 meters, is the Nunobiki Falls. Despite it’s smooth flowing nature, over the millenniums, the force of the water has scooped a 30-meter deep pool into the solid rock below it.

About an hour and ten minutes walk from the Salamander Center is the eight-meter high Ninai Falls, where the cold flowing water splits into two separate falls over a huge rock. This fall is best viewed from a higher location, as another waterfall above it, when seen combined, is said to be THE most beautiful sight in the whole valley.

The last of the Best Five are the Biwa Falls, with water falling from a height of 15 meters into an indigo blue basin ten meters deep. Surrounded by a cliff, this particular setting resembles a giant’s bathtub.

Along the waterfall laiden trail are a number of teahouses and restrooms. Steps have been carved into the hillside and steel stairs erected at the more difficult spots, and although the trail is on the whole relatively easy and safe to traverse, just be careful of the steel stairs that can be slippery in the wet, and icy in the winter.

Akame 48 Waterfalls are rumored to have been the one of the spiritual training centers for the Ninja, are very popular with tourists when the Autumn colors are at their best in early to mid November. The cool waters and spray of the waterfalls is most refreshing in the summer, while the best of nature can be enjoyed during the spring months The falls are ranked “Best 100 in all of Japan,” and the surrounding scenery, and even the open springs have been selected as the “Best 100 Forest Baths” in Japan. There is also a campground facility downstream of the falls where you can enjoy playing in the river and streams. 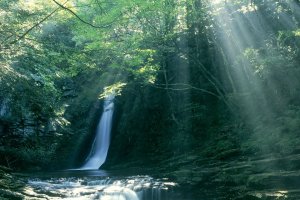 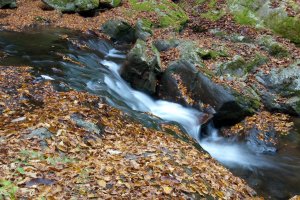 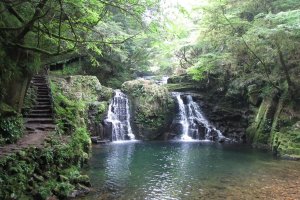