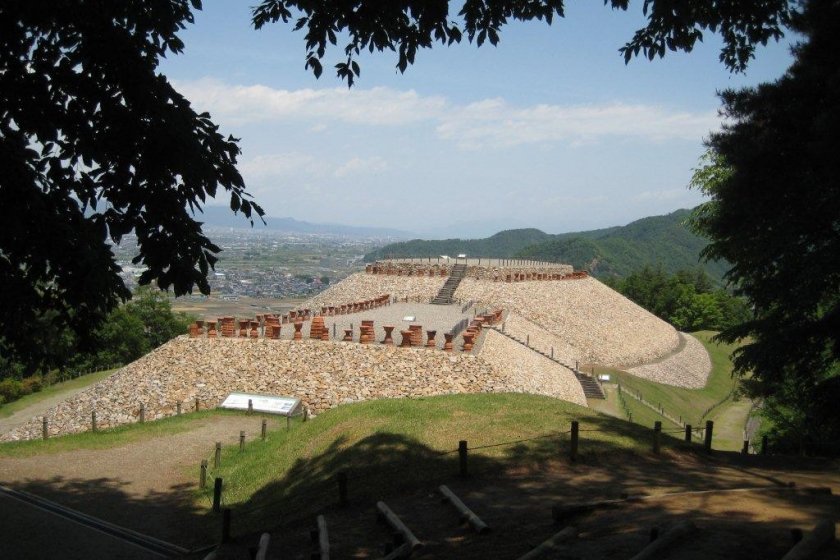 A Tomb with a View

Those interested in Japanese culture and history may be familiar with kofun, the ancient burial mounds found all over the country. These final resting places of ancient royalty are nowadays covered with trees, yet one has been restored to its former glory and is open to visitors.

Located high on a mountain side near Yashiro Station in Chikuma City, Nagano, is the Mori Shogunzuka Kofun. This late Kofun Period keyhole-shaped burial mound dates to the 4th Century AD and was built for a local ruler during the period. Known for centuries by the locals, it had been plundered by grave robbers numerous times before finally falling into disrepair -- the surrounding forest eventually hiding it from view until 1981, when an 11-year restoration began. By 1992 the tomb had all of its exterior stonework rebuilt, its decorative pottery that once adorned its top replaced with replicas. The surrounding land was cleared, revealing numerous additional circular burial mounds, and the Mori Shogunzuka Kofun Museum was built at the base of the mountain, where the tomb's interior structure and remaining artifacts are displayed. Next to the museum is Sarashina Village, a recreation of the ancient Japanese settlement in this area that predates the construction of the tomb.

The tomb itself is free of charge to visit, but with a catch -- visitors must climb some 120 meters uphill from the parking area, either along the shuttle bus road, via an adjacent stairway through the woods, or by an old switchback trail. A shuttle bus from the museum is available to museum visitors. For those who make the climb on foot, proceed to the area behind the museum. To walk the shuttle bus road, simply follow the paved route leading uphill from the east side of the museum. To take the stairway, walk through the Sarashina Village complex and find the beginning of the stairway path on the opposite side of the carp pond. To take the old switchback trail, begin on the shuttle bus road until the road takes a sharp right turn. Rather than following the paved road to the right, turn left and head uphill.

Those taking the old switchback trail will, on reaching the top, pass a relatively large circular burial mound before coming out of the woods to the Mori Shogunzuka Kofun itself. The other two routes arrive on the opposite side of the main tomb, surrounded by well-maintained lawns, in some areas with rather steep downhill slopes. Steps have been added to the left and right side of the narrow part of the tomb's keyhole shape, with a third set of steps heading up to the higher, more rounded portion of the tomb. Replicas of period ceramic pottery have been placed at intervals around the top of the tomb, and the top itself is covered in small round stones. The location of the burial vault is indicated by rectangular concrete markers in the center of the top level of the tomb.

While the tomb is breathtaking to see, it is equally matched by the view it offers of the valley below -- a view which stretches all the way to the northern part of Nagano City, with Mt. Iizuna towering over it. On clear days you can see the Japan Alps to the west as well. From this vantage point, you can gaze on the valley below and compare it to the illustration provided on a display on top of the tomb. This illustration recreates how the valley appeared at the time of the tomb's construction. It's an amazing contrast! Look to the left and you may be able to see the Nagano Shinkansen passing by far below. The high-speed train comes in and out of the tunnel below about once every 20 minutes.

The tomb you are standing on is just one of several recognized as a National Historic Landmark. Others like it, while not restored and completely hidden from view by forest cover, dot the mountaintops all around. The nearest one is the Ariakeyama Shogunzuka Kofun. This tomb can be viewed by heading further uphill toward an electrical power line tower near the peak. From the main tomb, walk up to the upper bus parking area and head to the opposite side. A hiking trail begins there and only takes about 5 minutes. Standing in the forest is a single sign, written in Japanese, explaining the Ariakeyama tomb. Look just beyond the sign and you can make out the keyhole shape of the ground. Absent the sign, one would never realize the tomb is there, as the entire site is heavily forested.

To see the rebuilt interior of the Mori Shogunzuka Kofun, go to the museum at the base of the mountain. Inside are artifacts found in excavations of the tomb and the actual burial vault of the tomb itself. The vault is viewable from two levels -- one from above and one from underground.

You may notice another larger museum next door. This is the Nagano Prefectural Museum of History. This museum is also well-worth a visit if you have the time. Separate admission charges apply. Across the street is the Anzu-no-Sato AgriPark, where many locals enjoy ichigo-gari, or strawberry picking. 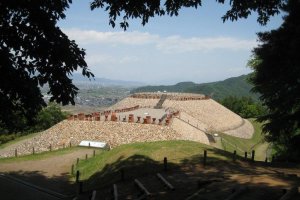 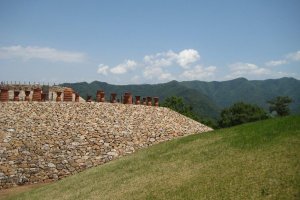 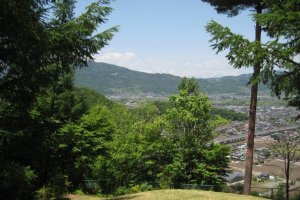 Elena Lisina a year ago
Thanks for the information, Robert! I plan to visit this place when it will be possible to travel.
Reply Show all 0 replies

Justin Velgus 8 years ago
This is really cool!! I think many people focus on the early Jomon period or Meiji, Edo, and WWII stuff, completely skipping the Kofun period. I have yet to see my first Kofun tomb, so this was some real motivation! My coworker just told me I can find some in Tohoku or even Hokkaido!!
Reply Show all 0 replies
2 comments in total