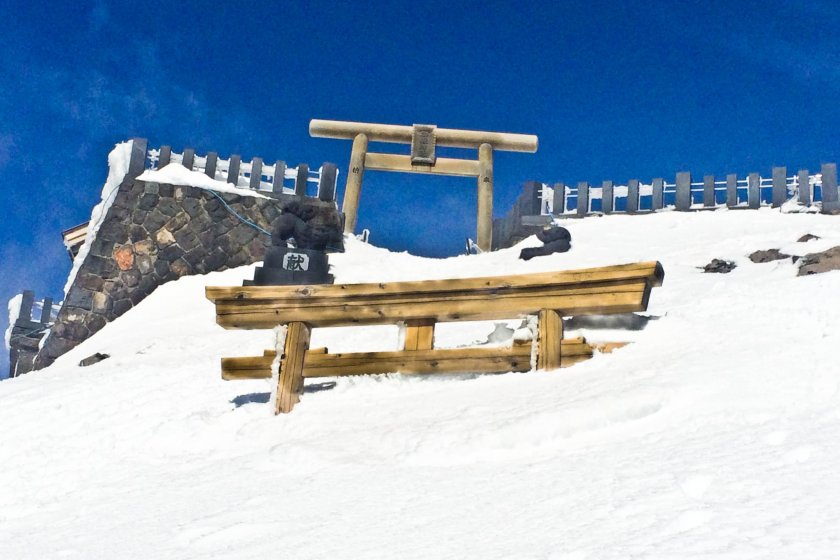 From the top of Mount Ontake, it is easy to lose sense of time which seems to become meaningless in the vastness of the surrounding landscape. Perhaps this is why so many people, like myself choose to climb this mountain.

The breathtaking views in themselves are amazing but there is definitely something more to this Mountain than just good views.

Upon our journey so far we have encountered numerous Temples, Shrines and countless religious monuments. The most I have seen so far throughout my mountain climbing experience.

Without doubt Ontake-San is a very religious place indeed, so much so that it even has its own officially recognised religion known as ‘Onake-Kyo’.

Similar to Shinto-ism, Ontake-Kyo focuses on the belief that evil can be overcome with harsh physical training. Unsurprisingly this includes mountain climbing. If you are lucky enough you might encounter some brightly dressed pilgrims in white, carrying large sticks. These pilgrims usually visit throughout the year, especially in winter as this is believed to be the best time to be presented with a more difficult yet spiritually rewarding climb.

We then readied ourselves for the next part of our hike where we planned to do a several hour return loop that would take us onto the peak of `Mamako-take` ( 継子岳 ), before returning along the same decent route to ‘Ta-no-hara’.

However as if by fate, the wind started blowing violently and the clear blue skies suddenly clouded over reducing our visibility dramatically. We tried without success to battle against the elements. With virtually no visibility, finding the trail in the white covered landscape became impossible and dangerous. After about several very long minutes we both accepted the futility of trying to continue. With a heavy heart, the only option was to return directly to starting point at Ta-no-hara, cutting short our much planned and anticipated adventure.

After descending for about an hour, the weather then typically began to clear up. However, by this point we were over a third of the way down and too mentally drained to attempt the 3 hour hike to `Mamako-take`.

As we descended further down, I was startled by something swishing past me on the left. To my surprise it was someone skiing down the mountain. Shortly after this, we then encountered what seemed to be an endless line of people coming up the mountain with skies and snowboards in tow. Despite being holy, Ontake-San is obviously very popular with many skiers and snowboarders.

At about 13.00 pm, we finally reached the car park, taking off our crampons and preparing for the long ride back home.Instinctively, I walked over to a statue which we saw earlier in the day at the beginning of the hike.

It suddenly dawned on me that it is customary when climbing any holy mountain to pray for good fortune whenever you encounter such statues. Unfortunately, perhaps it was because I wasn’t fully awake at 4.40 am this morning that I forgot to do this. Whether or not you believe in mountain gods it is always a good idea to make a small prayer, especially if you hope to be blessed with good weather! 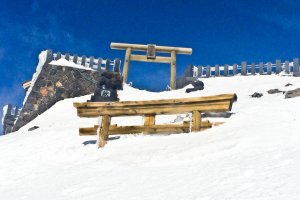 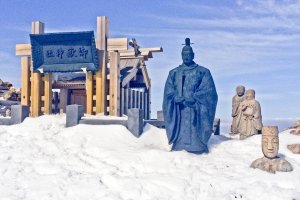 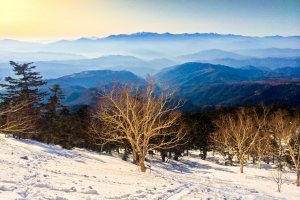 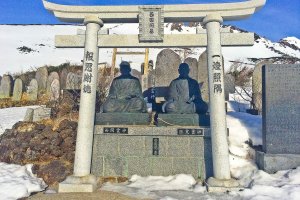 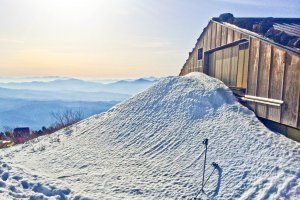 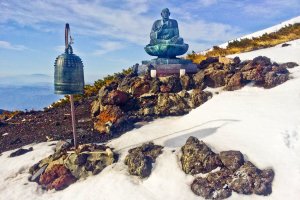 JapanTravel Guest 6 years ago
So, this is what Mt. Ontake looked like in May, before it blew up over the weekend. A beautiful location, and it's no wonder so many people were climbing or at the peak when it erupted. May those who lost their lives on Ontake rest in peace.
Reply Show all 0 replies
1 comment in total