A picture-perfect springtime scene in Nagano

If you're after an ultra-picturesque cherry blossom spot, look no further than Nagano's Garyu Park. It was selected as one of Japan's Top 100 best cherry blossom viewing spots, and the combination of the pretty pink blooms, stunning water reflections, and the surrounding mountains are the perfect trifecta of natural beauty.

If you can't make it to the park during the day, never fear - the blooms are illuminated after dark throughout the festival season, creating a wonderfully ethereal atmosphere.

Do note that the event dates are subject to change depending on blooming conditions, and it's advisable to check the official site before attending to get a definite confirmation.

Garyu Park can be accessed within about 15 minutes on foot (or a five minute taxi ride) from Suzaka Station, served by the Nagano Electric Railway's Nagano Line.

For those who opt to drive, the park is approximately 10 minutes from the Suzaka- Naganohigashi IC on the Joshin-etsu Expressway. There is a parking lot by the park's entrance, but it does tend to fill up quickly during sakura season. 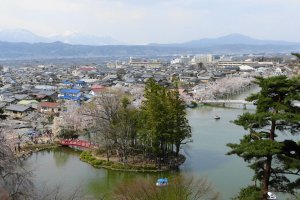