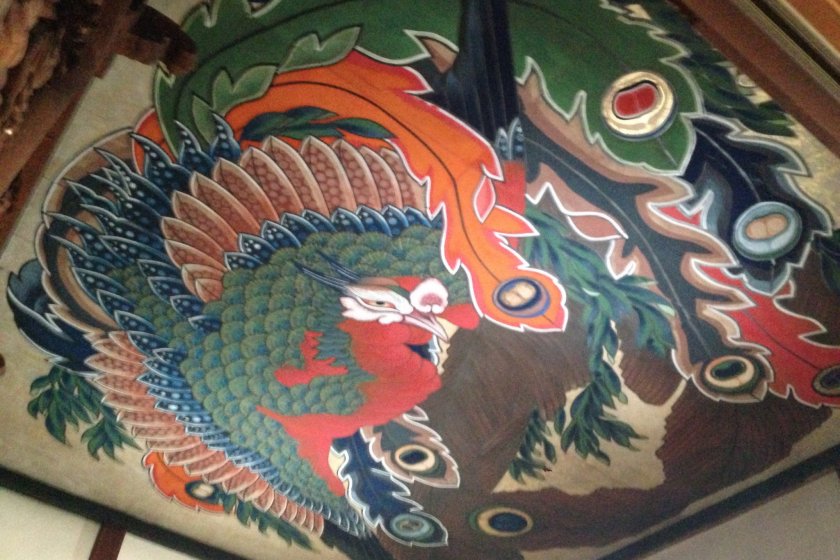 A Hokusai on the Ceiling

Hokusai's "Ho-O Staring in Eight Directions", on the ceiling of Ganshoin.

A lot of people the world over are familiar with the artwork of Katsushika Hokusai -- his "36 Views of Mt. Fuji" being perhaps the most famous. What most do not know is that he spent several years late in his life living in Obuse, a small town in the northern part of Nagano Prefecture, where an impressive work from that period remains on display.

A short distance east of Obuse Station lies Ganshoin, a Buddhist temple at the base of the mountains that lead up to Shiga Kogen. Though well-known by the locals, very few non-Japanese are aware of the temple's existence, or of Hokusai's contribution to it.  To find out, remove your shoes and head inside to the main hall of the temple, where high on the ceiling overhead, you can see a large mural painted by Hokusai in the 1840s. The mural, painted in brilliant colors that have retained their quality over the years, depicts a phoenix with its feathers spread about, interspersed with leaves of pine, laurel and plantain.

It almost appears as if the creature is smiling down, perhaps even smirking at those peering up at it. And this is where it gets its title -- "Ho-O Staring in Eight Directions." The eight directions represent the feeling that no matter where you stand, this mythical bird is looking right at you.

Though best viewed while lying down on the tatami mats in the main hall, the space is now filled with benches for people to sit on while viewing the illustration. Enjoy it until your neck starts to hurt.  Those who speak Japanese can also talk to the priest sitting in the hall, ready to answer questions about the temple and its famous artwork. A free lecture is also offered, in which they explain the history of the temple and its famous work of art.

After you have had your fill of Hokusai, be sure to walk over to the back, right-hand side of the temple, where you will find a small pavilion overlooking a Japanese pond garden. Those interested in haiku poetry would be pleased to know that this spot is where the renowned haiku poet Issa Kobayashi wrote one of his most famous works -- his frog haiku.

For Japanese history buffs, the temple grounds include the gravesite of Fukushima Masanori, a daimyo from the late Sengoku to early Edo periods.

Though there are some special days offering free admission, this temple usually has a ¥100 entrance fee for elementary school students and ¥300 for anyone older than that.  Smaller children are admitted free of charge, but keep in mind that this is a religious site, so it's a good idea to keep the little ones under control while inside. Any season is good for visiting, but if you want to hear Issa's frogs, come in April.

To get there, from Nagano Station take the Nagano Dentetsu train to Obuse Station. From that point by taxi it is a few minutes away. Walking, it takes approximately 30 minutes from Obuse Station. Rental bicycles are available at Obuse Station, for those interested in cycling the rather lengthy, steady uphill route.  The town of Obuse also provides a shuttle bus running a loop with stops at Obuse Station, Ganshoin and other locations. If you are arriving by car, the nearest highway exits are Suzaka Nagano East IC (20 minutes) and Shinshu-Nakano IC (10 minutes). Parking is free, but the lot is not very large. 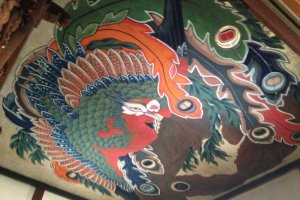 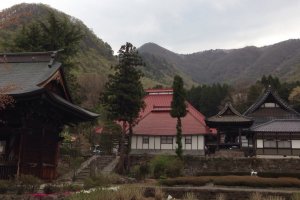 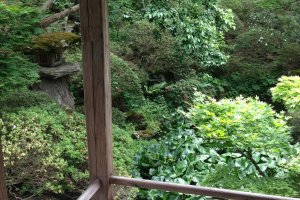