The perfect balance of adventure and relaxation

Snuggled away in a corner of Nagano against a background of white capped mountains and with a roof tucked under a blanket of snow, KAI Alps looks as if it could be out of a painting or film. Having never stayed in a luxury ryokan before I wasn’t really sure what to expect from the place, but the hotel made such an impression on me that I’m already scheming how I can get back there for Christmas next year! The building itself is made of wood and has a real traditional Japanese feel to it, with gates surrounding the path that leads up to the sliding doors of the main entrance. In the lobby, there is a massive glass window that looks onto a traditional Japanese garden, and many guests were enjoying the glorious view while staying nice and cosy inside.

Aside from the beautiful decor and exquisite cuisine, one of the things that impressed me most about KAI Alps was the number of activities they have available for their guests.

After finishing our multi-course meal (an activity all in itself), we had just enough time for a quick dip in the resort’s hot springs before being invited to the lobby to take part in ‘mochi tsuki’. A traditional activity that usually takes place around New Years, ‘mochi tsuki’ is literally translated as ‘rice-cake making’ and involves pounding steamed rice until it forms a dough-like texture, then topping with various flavourings.

Two of the hotel employees, dressed in traditional Japanese clothing, demonstrated to the guests how to pound the rice properly using a large wooden mallet that almost looked like something from a Mario game! Then, they invited those who wished to participate to pound the rice. I decided to give it a go myself and was really glad I did. The mallet was surprisingly heavy, but once I got into the rhythm of things it was actually quite easy and a whole lot of fun. I thought it was really great that the staff made sure that every guest who wanted to got a turn, and they encouraged the younger guests to take part too. All the kids seemed to get a great kick out of it, and we all managed to find room to go back for second helpings of the rice cakes despite the extravagant meal we had eaten only an hour ago! This “mochi tsuki” event is held every evening.

For the final activity of the evening we were told that there would be a ‘stargazing walk’. What exactly this would consist of I wasn’t entirely sure, but as someone who has really missed seeing star filled skies ever since moving to Tokyo I was more than excited to take part. Wrapped up in my warmest jacket, I joined the group outside the entrance and was surprised to discover a bus waiting to whisk us away to our stargazing spot. After a fifteen minute drive, we arrived in what looked, frankly, like the middle of nowhere, which of course is exactly what you want for stargazing! The hotel staff guided us off the bus, lighting the pitch-black pathway for us with torches. They distributed maps of the sky, and helped us located the constellations. The view of the stars was breathtaking, to say the least, and despite the cold I felt like I could have stayed there for hours watching the hundreds and hundreds of little lights that can never been seen from big cities.

Back at the hotel, I decided to take one final dip in the onsen before snuggling down in my futon, which the hotel staff had prepared for me while I was out. The onsen at KAI Alps is not your regular hot spring; in the morning, the bath is filled with rounds of cedar wood cut from local trees that produce the most divine scent when dampened with hot water. In the evening, the wood is replaced with what looked to me like an entire orchard of red apples, which also give off a beautiful, relaxing smell when placed in the bath, and I will admit that I was almost tempted to nibble on one while unwinding in the water! Oh, and I can’t finishing without mentioning the bottles of sake and other beverages placed within arms; length at the side of the bath, which guests are free to enjoy as they relax after a busy day. 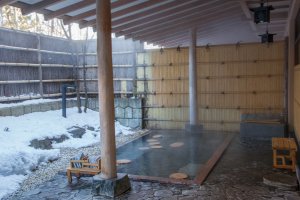 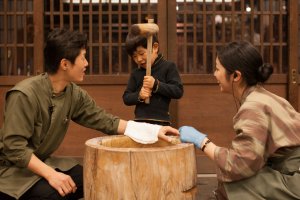 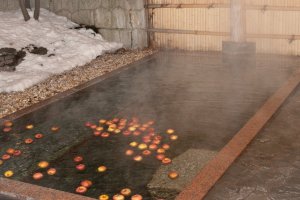 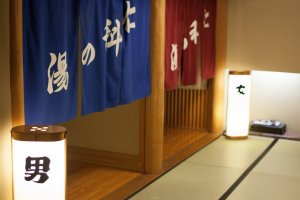 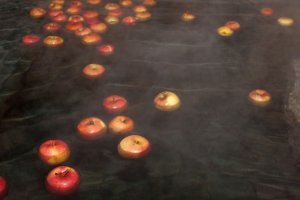 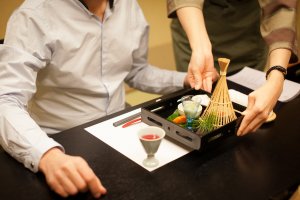