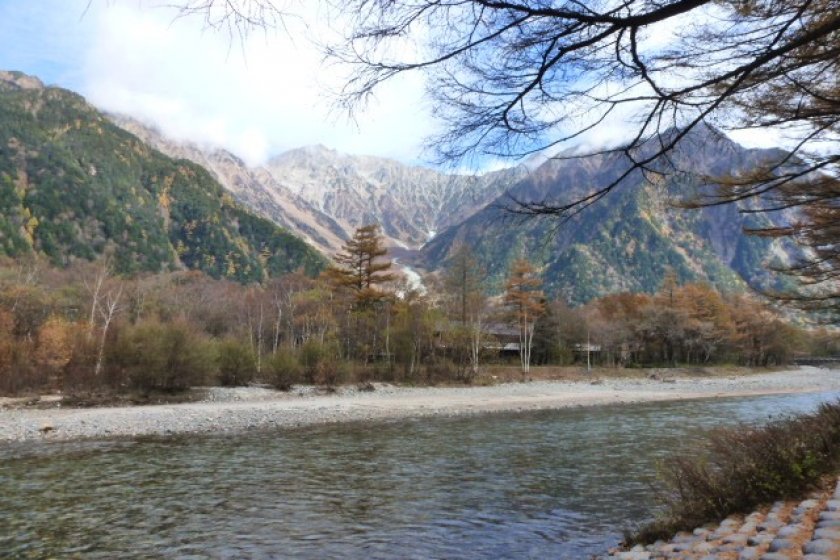 Hiking and breathtaking scenery at its best.

A Buddhist Priest was the first climber of the Kamikochi mountains, during the Banryu era. Mountain climbing was a form of worship and later in the Meiji era it became a sport activity.

British native William Gowland known as the “father of Japanese Archaeology” wrote an article about his hiking the Kamikochi Mountains in 1877. He was the first to describe them as the “Japan Alps.”

Then along came Reverend Walter Weston who discovered Kamikochi park in 1896 when he was 27 years old. He is known as the Father of Mountain Climbing in Japan. There is a memorial plaque along the river and each June the park celebrates the Weston Festival named after him.

A short bus ride from Takayama brings you to the entrance of Kamikochi.  There are many hiking trails with a 15 kilometer (9.3 miles) valley trail that runs along the Azusa River.  There are several bridges that cross back and forth meeting up with a variety of trails. You can start your hike at the Kappa Bridge, a few minutes from the visitor center. About an hour later you will come upon the Myojin Bridge where many hikers have their picture taken and on the other side of the river is the Myojin pond and Hotaka Shrine. Almost all the trails are easy to moderate.

Heading south from Hotaka Shrine is a large wetlands area with crystal clear water. Continuing on the trail you will come to the Taisho pond, which was formed by volcanic activity.  On a clear day you can see the reflections of Mt. Hotaka and Yakedake. You then walk through a dense forest and run smack into Tashiro Pond another reflective pool of water.

There were many monkeys walking along the trail especially around the Myojin bridge area.  Everywhere you will see alpine flowers and in the summer months, beautiful Japanese Azaleas.

The park is open from Mid-April to Mid-November and it is a great place to view Japan’s fall colors.

If you want to hike for a couple of days then you can stay at one of several lodges and spas in the park or go north to the Tokusawa area and set up a tent at a large camping site.

Also at the north end is the base for mountain climbing up the 3180 meter (10433 feet) Mt. Yari, also known as Yarigatake.

We hiked from early morning to mid afternoon, ate a bento lunch by the water, and then boarded a bus to shin-Shimashima, a local train to Matsumoto, and finally the Shinjuku express back to Yokohama.

There is a special park transportation ticket from Matsumoto using the Highland Rail Service, which includes a bus to the park.  Travel time is less than two hours.

One of the great things about Japan’s National Parks is that they are well maintained and very few if any people leave their trash on the trails.

If you like the outdoors, fresh air, and beautiful scenery, then Kamikochi is definitely worth the trip. 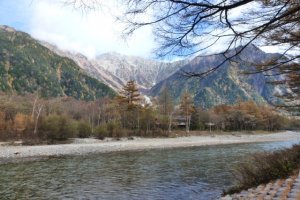 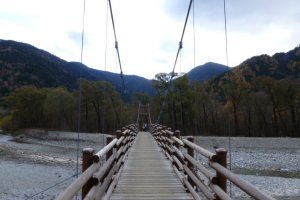 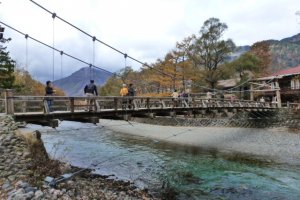 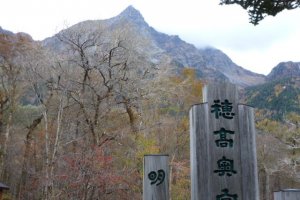 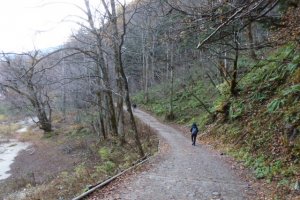 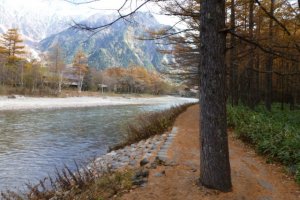