Hop along to the annual frog festivities in Matsumoto

I visited Matsumoto out of sheer convenience en route to another destination. But, the moment I walked out of the hostel to hunt for a restaurant, I knew my stay in this city would be too short. However, I was incredibly lucky to have been in Matsumoto during the final day of their annual two-day Frog Festival, which took place on June 18 and 19 this year.

Not even ten seconds had passed since I left my accommodation and the city had already become my muse and inspiration. Perhaps it was the setting sun teasing out of the purple in the sky, or the river guiding me across the city that made me fall head over heels for Matsumoto. Every few steps, the city had some element that demanded to be captured with a camera. The sound of beating drums and singing was what drew me to Nawate Street by the riverside, where a group of performers dressed in colorful patterned clothing were dancing to the rhythmic music. Welcome to Matsumoto’s Frog Festival!

Despite a light drizzle, the performers drew a large crowd of families with children, locals, and tourists that clapped along to the beat and actively participated in chanting to the music. The performers wore many brilliantly patterned clothing decorated with stripes and circles, forming a kaleidoscope of purples, greens, reds, and blues that celebrate the vibrant colors of frogs. Drummers were gathered underneath tents behind the performers, drumming to upbeat rhythms in unison while the lead drummer sang out the melody. The performers entertained throughout the day, and eventually paraded through Nawate Street as a finale, all the while drumming, singing, dancing, and thanking everyone for attending the festival.

Nawate Street itself was also in a festive spirit, and as expected, frogs were the major motif. Artists set up individual stalls in a similar fashion as Sunday markets, selling frog postcards, pins and badges, stickers, jewelry, paintings, and other handicraft products. Further into Nawate Street were restaurants as well as food vendors selling taiyaki, a fish-shaped pastry snack with varying flavors of cream filling, takoyaki, fried foods, kebabs, fried noodles, and many others. The street was also lined with shops on either side selling arts and crafts, ceramics, bags, clothing, and shoes.

If you happen to be in Matsumoto during this unique Frog Festival, definitely hop by even if just for a little while to join in the festive spirit. Bring your family, friends, or just yourself and enjoy the music, food, and atmosphere. You may even catch a cat engaging in some hardcore frog cosplay. 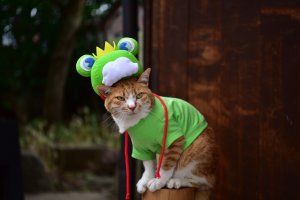 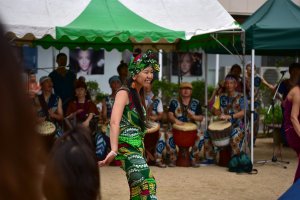 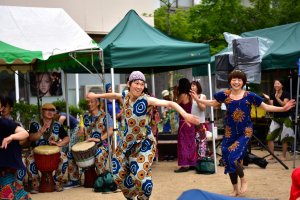 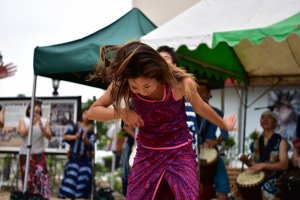 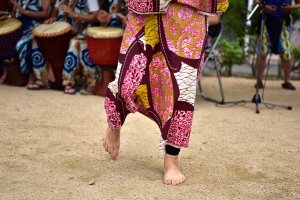 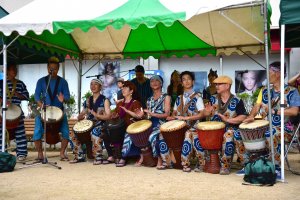 Elena Lisina a year ago
Actually, I'd like to visit tis festival and Matsmoto is one of my favorite places in Japan. : )
Reply Show all 2 replies

Kim a year ago
The cat dressed up in the frog costume is so cute!!
Reply

Elena Lisina a year ago
Yes! But I can't say I like frogs, only on pictures! : D
Reply

Elena Lisina 4 years ago
Thanks! Funny cat dressed as a frog! I've been to that street, but not at the Frog festival. It's too hot in summer! :)
Reply Show all 0 replies

Justin Velgus 4 years ago
Cat in a frog costume! I am there!
Reply Show all 0 replies

Malcome Larcens 4 years ago
Looks like fun, any idea what is the relation to frogs?
Reply Show all 1 replies

Bridget Ye Author 4 years ago
I couldn't read what the Frog Festival website wrote and perhaps they explained why there is a frog festival. However, I searched around a bit and I believe the Japanese like to celebrate frogs because the word for 'frog' is 'kaeru', which is also how they say 'to return'. In this sense, people celebrate frogs and some even keep frog motifs in their wallets in hopes of having money return to their wallets. Hopefully that is all correct!
Reply

Jihad Mahmoud 4 years ago
Look like so much fun!
Reply Show all 0 replies
10 comments in total