A Once In Seven Years Event

Without a doubt, the most popular attraction in Nagano City for tourists is Zenkoji Temple, the large Buddhist temple built in 642 AD in the city's Moto-zen Machi area.  The temple enshrines "The Image of Sangoku Denraian," an image of Buddha made in India and brought to Japan via the Korean Peninsula in the year 552 AD. Since its construction, the temple has long been a popular place of worship for people regardless of class or stature.

But this year, 2015, at the time of this writing, it is even more of a hit with travelers.  Once every seven years, in April and May, Zenkoji celebrates the festival known as Gokaicho, in which they erect a large, wooden pillar, named the "Eko-Bashira," outside the temple. A golden thread runs from the Eko-Bashira to the Buddha image hidden away from public view inside the temple since 654 AD. Worshippers coming to the temple during Gokaicho seek to touch the Eko-Bashira, hoping that their prayers would travel through the pillar and thread to the Buddha image. They also desire to view a replica of the Buddha image, which is shown to the public every morning during the Morning Services.

There are a number of scheduled ceremonies and events during Gokaicho, most notably the Chunichi-teigi Daihoyo Special Services. Held on two different dates, one for the Tendai Sect and the other for the Jodo Sect, these services feature children and Buddhist priests dressed in elaborate costumes and gowns parading up the path alongside the Eko-Bashira, with paper lotus petals scattered all about.  The beauty of this event draws throngs of crowds every time it is held.

And with the crowds comes long lines and lots of traffic. If you plan to visit Zenkoji during Gokaicho, do yourself a favor and use public transportation. There are shuttle buses running from Nagano Station, but if you are up to it, simply walk from the station up Chuo Dori to the temple. The number of people heading that way will increase the closer you get, and at some point you will think you are in a typical Japanese evening matsuri. Head on up the hill and you will eventually see a line of visitors forming in the middle of the road.  That is the line to touch the Eko-Bashira! If you really want to touch it, by all means get in line and wait. If not, proceed onward and feel free to wander around, snapping photos and feeling the energy all around during this event.

Gokaicho for 2015 runs from April 5 to May 31. To get to Zenkoji from Nagano Station, take one of the many shuttle buses found in front of the station on the Zenkoji Exit side. Or walk across the street from the station, head over to Chuo Dori, turn right and walk all the way up Chuo Dori until its end at Zenkoji. The route is well marked and, in truth, you can probably just follow the crowd all the way there.

If you insist on driving there, it would be wise to park as far away from the temple as possible and walk the remaining distance.  Avoid Prefectural Route 35 heading uphill next to Shinshu University at all costs, as taking this road will put you in a traffic jam for a very long time.

Find out more about Zenkoji Temple. 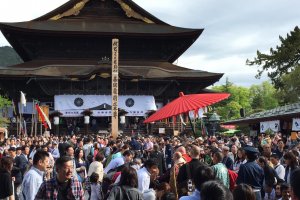 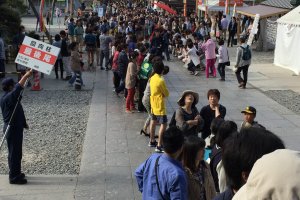 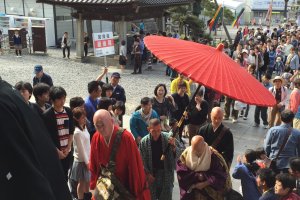