One of Nagano's top attractions

Zenkoji Temple in Nagano prefecture is considered one of Japan's most popular temples and the largest after Nara's Todai-ji. It is surrounded by a bustling religious district and is reached by following the lively Nakamise-dori avenue that is lined with temple lodgings, shops and abbey residences.

The present temple site was founded in 642, when Yoshimitsu Honda enshrined a statue of Buddha (the 'Ikko Sanzon Amida Nyorai'), back when the religion was first introduced to Japan – a replica version of the statue is only put on public display every 6 years (known as Gokaichō and next due in 2021), while the original remains hidden out of view (termed 'hibutsu').

Whilst the surrounding town began to develop around the temple's growth during the Kamakura era, the temple has also suffered damage at various points in its history, with the current structure actually the 11th reconstruction, dating back to 1707.

Zenko-ji is widely considered a unique temple for a variety of reasons. It belongs to both the Jodo and Tendai sects simultaneously, has always been open to women, and has a unique north-to-south layout with Mount Omine to the north.

A journey to Zenkoji will start to the south, with visitors passing several temple lodgings (shukubo) to reveal the outer Niomon Gate, flanked by a pair of Niō Guardians. Following a path that includes several guardian Jizo Bodhisattva, visitors will then reach the main Sanmon Gate, which dates back to 1750, and the central temple area.

The two-storey main hall (Hondo) is a designated National Treasure, constructed from almost 60,000 lengths of wood with a roof made of cypress bark. It is vastly decorated with many Buddhist statues housed there, including a wooden statue of Binzuru.

Visitors can pay a small fee of 500 yen and remove their shoes to enter the inner chamber, where beside the main altar they can descend a narrow staircase into an underground passage. Here visitors are on a quest to find the 'key to paradise'. While walking through the passageway in complete darkness, a metal key is secretly hidden on the right-hand wall and it is said those who are able to touch it will gain enlightenment.

Find out more about Zenkoji Temple. 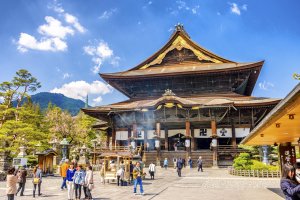 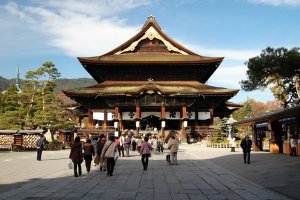 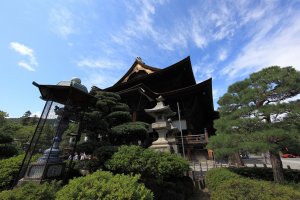 Elena Lisina a year ago
Looks grand! Must visit!
Reply Show all 0 replies
1 comment in total