Getting around in Nara: Guided Tours

If you only have a limited amount of time in Nara and want to take in as much as possible seeing the temples and the rich history of the area, it's a good idea to take a scheduled bus tour that visits all of the major sites. You will not see all of the temples in Nara in one day, but if you can combine one or more tours, then it's possible to cover a lot of ground. It is possible to visit many of these places by taxi but its recommended that you book an English-speaking driver in Kyoto as it may be hard to book one once you are in Nara. If you go to the Nara Tourist Information office at the station they can also let you know about the volunteer English speaking guides, who are available to escort you around Nara, free of charge. For further information, see the following websites on departure times and prices.

Almost all the world heritage sites within Nara can be seen with this pass. Kofuku-ji, Kasuga Taisha, Todaiji, Toshodai-ji, Yakushi-ji and the remains of Heijokyo etc. You can purchase these passes at the Kintetsu "Nara" station and JR "Nara" station. You can also use a fixed sightseeing bus.
http://www.narakotsu.co.jp/teikan/teikan/yjapan/tour_1.htm

One such bus used the Sekai Isan Guruto Bus Pass, which takes in all of the major Heritage sites in Nara. One ticket costs about 800 yen.The bus departs every 60 minutes and goes to the following sites:

Another option is the Vanbina bus tour, which uses brightly colored buses and visits many of the Heritage sites around Nara park.  Taxis are abundant in Nara and you can wave one down in the street. If they have a little red sign in the passenger side window (空車）which means the taxi is vacant for hire. The driver will open the door from his (driver's) side so it is not necessary to open the door yourself. Its a good idea to step back as the back door will open automatically. The first kilometer on the meter is about 670 yen and you pay a rising scale the further the distance traveled. It is possible to rent a driver for the afternoon for a guided tour. If you want an English speaking driver it is best to book a day before as the driver sometimes has to come from Kyoto due to the shortage of English speaking drivers in Nara. Contact the Nara Tourist Information office for details at Nara Kintetsu station. At Nara station you can also book English speaking volunteer guides who will show you around Nara, and explain the history and the various sites around Nara Park. Most are retired people and very keen to speak English and meet with foreigners.

If you walk towards Nara Park you will often see a line of rickshaws and their drivers waiting for customers. They are easy to spot as the rickshaw  drivers wear "happi" coats, webbed sandals and sport a headband (hachimaki). A rickshaw can carry up to two people and the driver will tell you the cost, usually starting at around 2-3,000 yen depending on the distance you want to go. Bicycles can be rented from Yamato-Saidaiji station, if you go out the south exit of the station walk about 50 meters to the bicycle parking building you can rent bicycles by the hour, half-day or full-day. 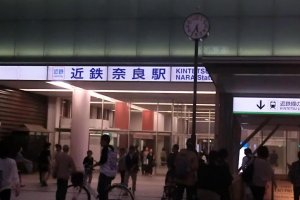 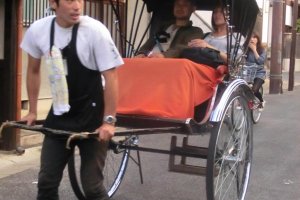 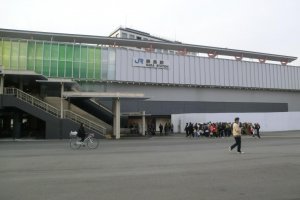