A shrine to the very first Emperor of Japan

Long before Tokyo, and even Kyoto, were considered the capital cities of Japan, this honour fell to what is now the small town of Kashihara in central Nara Prefecture. It his here that Jimmu Tenno, the first Emperor of Japan, established his palace following his conquest of Yamato.

Nothing remains of his palace but near to the location where once it is believed to have stood, you can find Kashihara-Jingu, the main shrine dedicated to the first of the Imperial Line.

This large shrine complex is actually quite new as far as shrines go. It was built in 1890 during the Meiji Period midst a wave of rising nationalism. The people of Japan petitioned Emperor Meiji to establish the shrine in the vicinity of Emperor Jimmu's tomb and former palace site so that he may be worshiped accordingly.

Permission was granted and the shrine was established at the foot of Mount Unebi, just a short distance from the tomb and very close to the ancient capital of Fujiwara-kyō. From what I understand, two buildings from the Imperial Palace in Kyōto were donated by the Emperor to be used in the founding of the shrine.

Kashihara-jingu covers quite a large area, much of which is heavily forested, especially Mount Unebi and around the Emperor's tomb. The Omote-sandō or front approach is a long, wide path with a massive wooden torii at each end. Passing under the second torii leads to a small courtyard holding the large temizu-sha basin for purifying ones hands and the Minami-shinmon South Gate which leads to the expansive main courtyard.

Inside the main courtyard, and immediately to your left are a couple of buildings where you can purchase charms or receive a Goshuin temple stamp from one the priests or shrine maidens, otherwise known as miko. To your right are a few more buildings and a rest area with seats and vending machines.

The courtyard is dominated by the Ge-haiden, a huge hall that acts as the outer worship hall. Inside are the usual offering boxes for tossing coins and these sit in front of a carefully raked inner courtyard. On the far side is Nai-haiden or Inner Worship Hall. This one is slightly smaller than the outer hall and gives the impression that it has a pair of Chigi, (the crossed gable ends you see on roof of most shrines) sticking out of the center of the roof. Actually they are part of the roof of yet another hall, simply called the Haiden, that sits behind the inner hall and joins it to the Honden or main hall that sits right at the heart of the shrine.

The four halls are also linked by wooden corridors which wall in the whole enclosure. The three inner halls and most of the surrounding corridors appeared to be closed to the public, but you could follow the corridor around to the right a little way. On the walls here are painted modern murals depicting some of the key events of the journey of Emperor Jimmu, although the information itself was in Japanese.

Back in the main courtyard and heading north takes you to another gate and beyond into another long, wide path. Many smaller paths branch off from here, leading to other small shrines dotted around the woods. The main path brings you out through another giant torii marking the northern exit of the shrines. From here, you can follow the main road for about 10 minutes to find the tomb of Emperor Jimmu. Unlike the huge keyhole shaped tombs of Habikino and Mozu in Osaka Prefecture, Emperor Jimmu's is a surprisingly small and perfectly square island covered in trees. Another 5 minutes walk along the main road and you can also find the tomb of Emperor Suizei, third son and heir of Emperor Jimmu who ruled from 581 to 549 BCE.

Heading all the way back to the south gate, you can find a large pond called Fukada-ike. A path runs around the perimeter and a couple of wooden bridges criss-cross it at points. It is a popular area for walkers and it's also quite common to find several people sitting along the bank, painting. Following the path around the pond and heading out of the east gate, you will eventually come to the tombs of two more Emperors. Closest to Kashihara-jingu, but still several minutes walk, is the tomb of Emperor Itoku and further still is the tomb of Emperor Annei. Emperor Annei was the son and heir of Emperor Suizei and Itoku was second son and heir of Annei, putting the resting places of the first four Emperors of Japan all in relatively close proximity to each other.

Kashihara-jingu is a fascinating shrine with some beautiful buildings and steeped in history. It is also quite easy to reach, especially if you are already planning a trip to the nearby sacred Mount Yoshino. It is also very close to another former capital in Asuka Village.

One of the best times to visit would be National Foundation Day on February 11th when they hold a special festival to celebrate the accession of Emperor Jimmu as well as the huge Spring festival on April 3rd, and an Autumn festival on November 3rd. 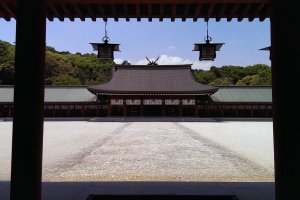 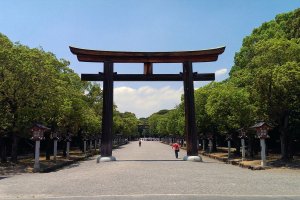 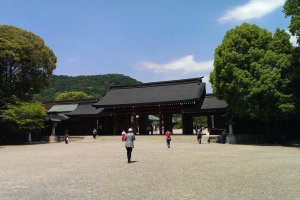 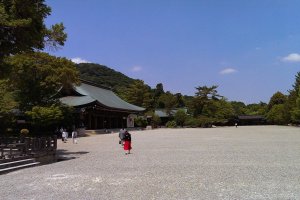 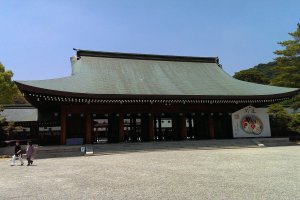 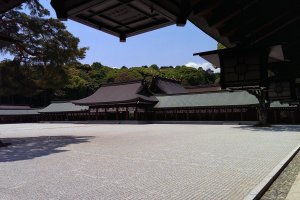 Sébastien Duval 4 months ago
Kashihara-jingu certainly feels unique on 11 February but it may be super crowded, and foreign tourists may feel uncomfortable surrounded by old nationalists in military uniforms (note: I stood out as the only foreigner in the crowd when I visited on that day but there was absolutely no problem). Alternatively, I'd recommend visiting during Shichi-Go-San (with kids in kimono).
Reply Show all 1 replies

Gary Luscombe Author 4 months ago
I also had no problems when I went for the February festival, everyone was absorbed in the occasion. On a much quieter day though I did have an ultra-nationalist old man follow me around a bit and glare at me whenever he could.

Personally I didn't care and it didn't make me feel uncomfortable, I just met his glares with a smile until he realized he was having no impact on me and left me alone. The shrine does occasionally attract people like that because of its very nature, but that was one incident in a couple of dozen visits so I certainly wouldn't put people off going to check it out!
Reply

Gary Luscombe Author 2 years ago
Apart from New Year and it's annual festivals, it's an extremely quiet shrine that is well under the radar of most travelers. Kashihara and neighbouring Asuka are great places that you can have almost entirely to yourself!
Reply

Elizabeth S 2 years ago
My kind of place! Exciting and busy places are fun, but sometimes, you just need to soak up the atmosphere of ages in peaceful surroundings.
Reply

Bonson Lam a year ago
I agree. I remember cycling in Tenri, and watching a Japanese wedding from afar. It was serene. So many parts of Nara are very, very peaceful.
Reply

Gary Luscombe Author a year ago
Nara is yet another place cursed by the fact that people focus on just the namesake city. That whole central area of the Kii Peninsula covering central and southern Nara, western Mie and all of Wakayama has some phenomenal scenery and interesting places to visit but rarely comes across anyone's radar. That you absolutely need a car doesn't help though!
Reply

Sleiman Azizi 4 months ago
When I visited Nara, I admittedly had no idea of what lay beyond 'standard Nara'. It's a shame because Japan as SO MUCH MORE than brand name tourism.
Reply

When I can visit, I want to hike Mt. Wakakusa and wander some of the other trails that are part of the old pilgrimage routes.
Reply
9 comments in total