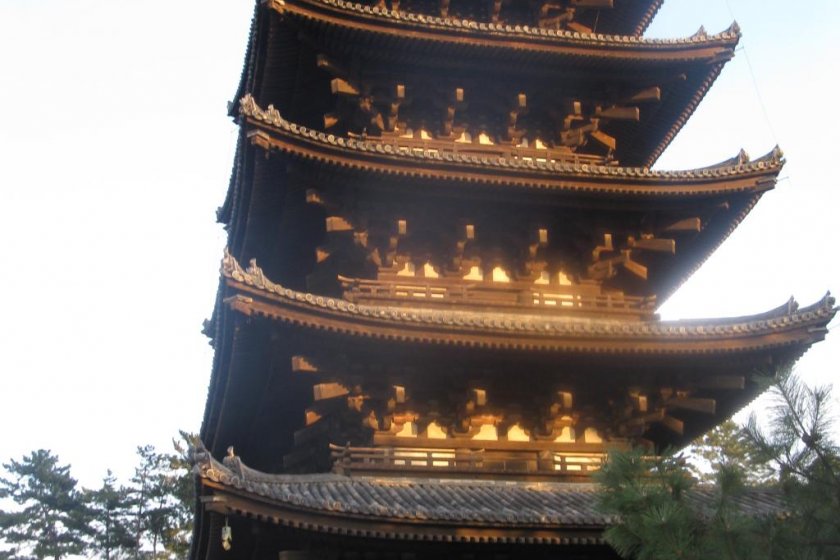 At over 50 meters, this pagoda is the second-tallest in Japan

Kofukuji Temple is an impressive reminder of the former greatness of Nara, which was the capital of Japan from the year 710 to 784. Kofukuji consists of numerous significant buildings and is part of the UNESCO World Heritage Site listed as the "Historic Monuments of Ancient Nara." Its five-story pagoda is the second-tallest in Japan, and is commonly recognized as a symbol of Nara.

Kofukuji used to be the tutelary temple of the Fujiwara clan, which were very influential in Japanese politics during the Heian Period, which lasted from 794-1185. It was established in the year 669 by Kagami-no-Okimi to pray for the ailing health of Fujiwara no Kamatari, who was a statesman and the founder of the Fujiwara clan.It was initially built in Kyoto, but was moved two times before it settled into its present-day location in 710 to coincide with the move of Japan's capital to Nara.

Kofukiji is a Buddhist temple, and is Japan's national center for the Hosso (or Yuishiki) school of that religion. Hosso Buddhism originated in China from Indian traditions and teaches that our understanding of reality comes from our own minds, rather than our experiences in the concrete world around us. In addition to Kofukuji, the Hosso sect owned many prominent temples in Nara and Kyoto, such as Kiyomizudera and Horyu-ji. However, as tourism grew in the 1800's and 1900's, the owners of these temples did not want to pay a percentage of their tourism income to the sect's organization. Therefore, those temples broke away from the Hosso sect in the mid-1900's. Kofukuji and Yakushiji (also in Nara) still remain. Though the influence of the Hosso school of Buddhism has been greatly reduced, it still survives in today's Japan, even after dying out in China and Korea.

Today, only a handful of the temple's original 175 buildings remain. Among them are both a three story and five story pagoda, the latter of which is the second-tallest in Japan at a height of 50.1 meters. Both pagodas are National Treasures. The Eastern Golden Hall (Tokondo), also a National Trasure, features a large wooden statue of the Yakushi Nyorai (Healing Buddha). The Kofukuji National Treasure Museum houses numerous statues, paintings and documents that have been designated as National Treasures or Important Cultural Properties, and presents many items with the purpose of promoting a greater understanding of Buddhism. There are also two octagonal halls, and the southern one - called Nan'en-do - is significant as being Site #9 of the Kansai Kannon Pilgrimage, a 33-Buddhist temple pilgrimage throughout the region.

Kofukuji is free and open daily, 24 hours a day. It is well lit at night, giving your travel schedule some flexibility as many temples and shrines in Nara and Kyoto close at 4 or 5:00pm. However, the National Treasure Museum and Eastern Golden Hall are only open from 9am to 5pm daily, with 4pm marking the last admission time. Both have a small fee, and a Combination Ticket is available for both at a slightly lower cost.

Note that there is currently construction work at Kofukuji Temple to reconstruct the Central Golden Hall (Chukondo), which was destroyed in a 1717 fire. It is scheduled to be completed in 2018, with further construction work to continue until 2023. The construction, however, should not detract visitors from Kofukuji and it remains very much recommended. 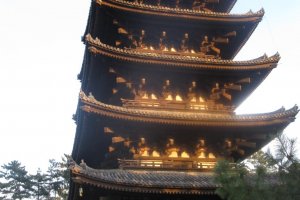 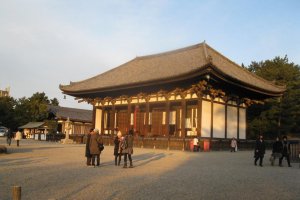 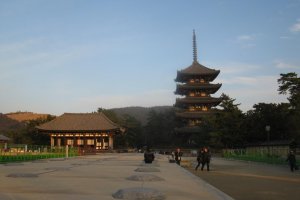 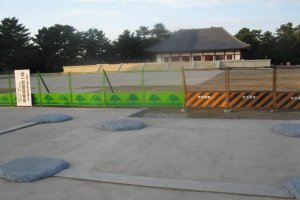 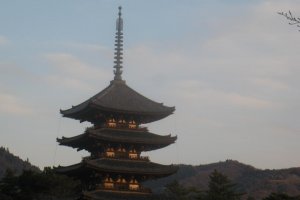 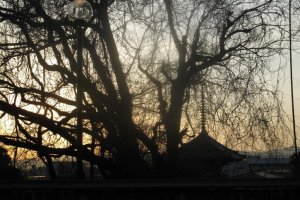