With booby traps and murderous ninjas pursuing me it was chance running across the rickety bridge or get sliced to pieces. The wooden boards of the walkway bent and creaked underfoot as I started my full speed crossing. The bridge swayed wildly as I approached the center. The sound of breaking wood, a scream and an outburst of chatter from behind me told me of death of one of my pursuers. I passed the halfway point of the bridge and chanced a look back over my shoulder. The ninjas had given up their pursuit but two of them had their swords drawn and raised over their heads, they were preparing to cut the bridge support cables!

No of course there were no ninjas but Totsukawa Village in southern Nara Prefecture does sport a rickety looking Indiana-Jones-Movie-recalling suspension bridge. It’s called the Tanize no Tsuribashi. Built in 1954 and connecting the villages of Tanize and Uenochi across the Totsukawa River, it was one of the first great post WWII public works projects. It was built to allow school staff and students to commute to and from school and to facilitate the flow of mail and other goods to and from the two towns. At 297.7 meters in length it was and remains the longest steel cable suspension bridge built for the purpose of facilitating everyday life and business activities. Longer steel cable suspension bridges exist elsewhere in Japan but they were either built to be tourist attractions (like the Kokonoe Yume Otsuribashi in Oita in Kyushu) or relics of a now defunct logging industry converted to a tourist attraction (like the Yume no Tsuribashi in Shizuoka). Postal staff and local people are allowed to cross the bridge on lightweight scooters and bicycles for the purpose of mail delivery, goods delivery and commuting, and the local taiko drum team uses the bridge as a stage for their part in the annual “Tsuribashi Matsuri” (Suspension Bridge Festival). Visitors from elsewhere in Japan and the world must cross the bridge on foot. Signs at either end of the bridge warn that no more than 20 people at a time should cross the bridge.

I had been warned before I visited the Taniza no Tsuribashi that the bridge was rickety and swayed when people walked across it. I deliberately tried shaking the bridge during my return crossing and elicited little more than a side to side slithering motion. It did not bounce, sway or roll at all. The Tanize no Tsuribashi is one of the most stable suspension bridges I’ve crossed. It also has higher guard rails and more robust fencing than other bridges I’ve crossed giving me (and many fellow bridge crossers) the confidence to stand at the railings, take in the view and snap the perfect shot. The wire mesh that makes up the guard rail and fencing does not hide the view or the fact that the bridge is 54 meters above the river. If you are acrophobic it is likely that crossing the bridge will be a struggle. Do it anyway, the views and the sense of accomplishment from conquering your fears are well worth it. Crossed any chasms recently? Happy travels! 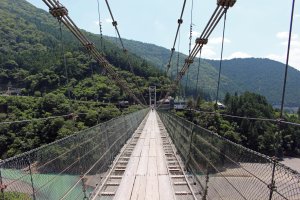 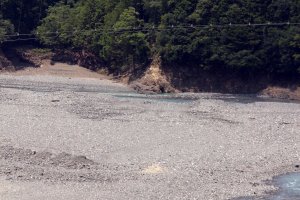 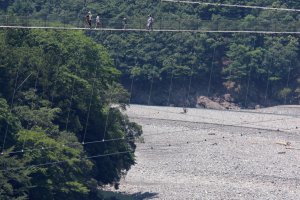 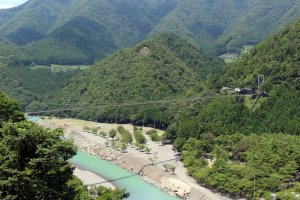 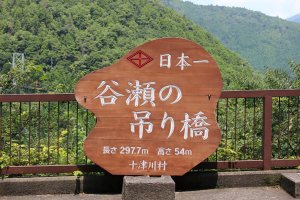 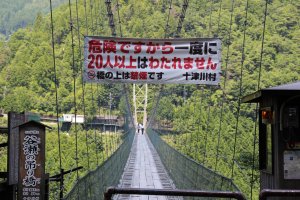