A new era for the famous station

Tokyo's iconic Harajuku Station has finally been replaced. On Saturday, 21st March, 2020, the new station opened ushering in a new era for travellers along the capital city's ever busy JR Yamanote Line.

Just off to the side of the old station building, the new Harajuku Station is a modern, gleaming construction of glass and space, built in preparation for the 2020 Tokyo Olympic and Paralympic Games. The new two-storey station sits by its predecessor with the famous Meiji Shrine behind it and the hyper-busy Omotesando-dori in front.

The old Harajuku Station was built nearly a century ago, with its wooden structure developing a following of admirers courtesy of its unique charm and old-world feel. Around 70,000 passengers use the station each day and come New Years time, those numbers swell to almost three million people. Authorities concluded that the original station could no longer satisfy modern health and safety regulations and despite the sentiments surrounding the building, work on the new station began in 2016.

A much more spacious and modern design is the result. The station's glass walls allow in plenty of light, opening up the ambience of one of Tokyo's most iconic locations. The new station also features a convenience store on its first floor as well as a coffee shop on its second. Views of the old station can still be had from the new station, at least until after the Olympic and Paralympic Games when it is scheduled to be dismantled. Elements of its historical design are to be incorporated into a commercial building to be built in its place.

Along with Meiji Jingu Shrine and Omotesando-dori, the new Harajuku Station will still offer access to the spacious Yoyogi Park as well as the youth culture driven shopping streets of Takeshita-dori and its energetic surrounds. 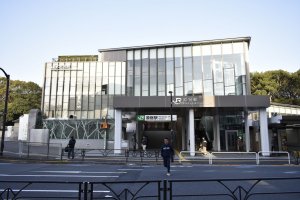 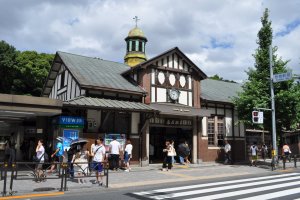 Sander van Werkhoven 6 months ago
I still think it's sad they couldn't incorporate at least part of the old building in the new station. Judging on the photographs, I'm still not impressed by the new one. If that will change when I see it for real? Only time will tell...
Reply Show all 2 replies

Sleiman Azizi Author 6 months ago
Almost insignificant, I know, but I happen to like the actual sign on the station, particularly the font.
Reply

Sherilyn Siy 6 months ago
I had the same opinion, Sander. I was looking for vestiges of the old in the new.
Reply

Bonson Lam 6 months ago
I miss the old station too, but the new one positively gleams. I have profiled an art deco style station once in Osaka, but that has been replaced too! Japan Travel can be a repository of old and new.
Reply Show all 1 replies

Sleiman Azizi Author 6 months ago
The old station is cute, charming and crushingly small. Life changes. That's the only real rule. In time, I think the open space of the new station will eventually create its own personality precisely because it is open and well lit.
Reply

Elena Lisina 6 months ago
Old station had its own face and charm... This one is just modern and convenient.
Reply Show all 1 replies

Sleiman Azizi Author 6 months ago
Sure, but I'd say that the space will eventually create its own personality.
Reply
7 comments in total