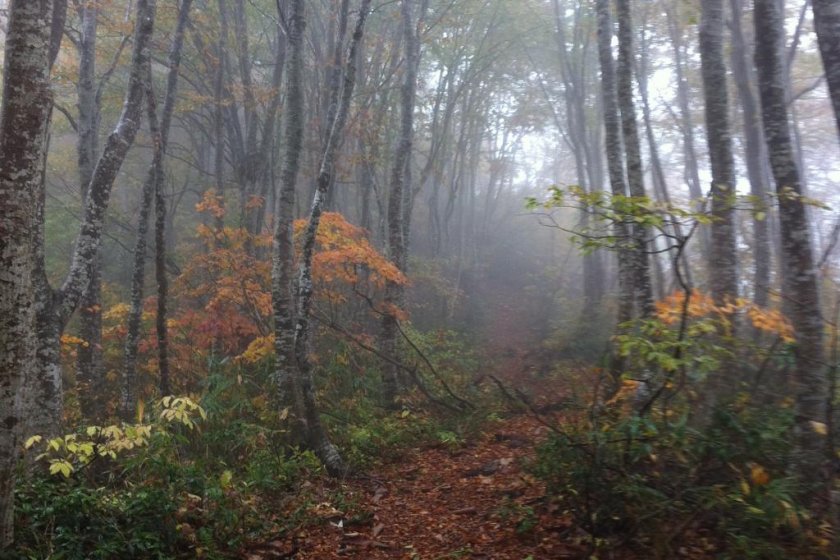 A beautiful hike in Northern Nagano

The weather was pleasant and sunny as we climbed up a winding trail through the buna forest. The day’s hike was going to be a long one, so we took the pace easy. The day rolled through forests, by ponds and meadows, through farmland, along fire trails and ridges, by pretty gardens and past stunning views over the Chikuma valley. It was probably the most varied day of hiking of the trip. Along the way we caught a number of glimpses of Nozawa Onsen, bathed in autumn sunlight in the foothills of Mount Kenashi on the other side of the valley.

Part of the hike lead past the remains of earthworks, ancient military installations from the period when the route was an important trade and defence artery. A signboard mid-trail told how we were looking at the stronghold of Uesugi Kenshin, a C16th warlord. Several times along the Shinetsu route we saw evidence of much older footpaths – although rarely on the ridge itself (too exposed to the weather for goods traffic, and too open to view to be a good military route). A few short sections follow these ancient routes, trodden over the centuries into half pipes in the soft earth (as you sometimes see in Britain’s disused Roman-era paths), and shaded by trees and bushes linking branches overhead.

We found a clearing of replanted trees, where cedars had been harvested leaving a scarred mountain, and a conservation group had replanted buna, the indigenous birch evolved to survive the harsh winters of the Japanese mountains. It was a reminder of how the natural robustness of the ecosystem of the forest, in the face of extreme weather and unfriendly mountainsides, becomes fragile in the face of human intervention.

Exhausted after a 22km day, with a good deal of climbing to boot, we finished midway up the slopes of Togari ski resort, walking wooden-leggedly down the slopes to meet our next host in the carpark of the deserted ski resort. We stayed in the this ryokan for three nights, shuttled to and from each trail head each day (and therefore for a couple of days leaving most of our equipment there and carrying only a day pack). Although in many ways a standard small family ryokan, of which you’d find hundreds if not thousands of clones across Japan, this was distinguished by a fine collection of railway paraphernalia, 24/7 television in the dining room, a fine onsen bath, and good food.

The next day the forecast was for rain, and it didn’t disappoint! We planned a slightly shorter route, but headed out nevertheless. Starting from the Togari ski resort car park, we slogged up an access trail in mist and rain, damp inside our raingear from the exertion, and drenched outside from the weather. The real trailhead led even further up, till we reached the top of the highest of the ski lifts. Sweating and sodden, our spirits were lifted by the sight of a young fox leaping across a clearing ahead of us!

The bulk of the day was spent on a classic ridge hike, rolling up and down with the spine of the mountains, interspersed with tunnels of trees, and with foggy glimpses of the vistas each side of the often-steep drops either side. We were thankful that the trail was so well maintained; not only did we not get lost in the poor visibility, we didn’t miss our footing as would have been so easy in slippery tree roots and the loose peaty soil underfoot. Unsurprisingly we only saw two other hikers that day, and we felt we had the mountains to ourselves.

Although still damp, the afternoon dried a little, and we took a short detour at the end of the hike to look at the “teahouse lake”, a pretty ornamental lake by the final trailhead. But the sight of our ride appearing through the damp fog was nevertheless a welcome sight at the end of the day – and stripping off and soaking in an onsen has rarely felt so indescribably wonderful.

The next day was a classic autumn day, with mists, the odd spot of rain, distant sun, clouds, and much chillier than the previous few days. The route was mostly a continuation of the ridge hike, but with the added benefit of views stretching far into the distance.

Japanese ridge hiking is very distinctive. Once you’ve clambered up the often steep access path, you gather a rhythm of short but often very steep ascents and descents, between pathways threaded through archways of trees, dropping away each side. I’m sure a good geographer could explain the topography in the context of the geology of the formation of these mountains many millennia ago, but from a hiker’s perspective there’s a real “ahhh…. Japan!” feel. The interspersion of technical and strenuous climbs, with often magically beautiful avenues between trees and bushes, and the irregular rewards of distant views (in cool sunny weather, often very distant views) is nigh-unique.

Much of the trail is on indulgently springy peat, or leaf mould, the product of decades of fallen vegetation. It’s wonderful to walk on, soft, easy on tired feet, and although it holds water, the surface drains quickly. The occasional tarmac or gravel sections only highlighted how blessed we were for most of the route.

We hiked off the trail through a steep trail in forest glowing in late afternoon autumn light, to meet our innkeeper and ride home. That evening she cooked a spectacular dinner, including some regional specialties; a fine memory to finish with.

I travel a great deal, almost everywhere, but have a special affection for Japan. You'd be surprised how many routes can be persuaded to go through Japan if you plan your travel carefully :) 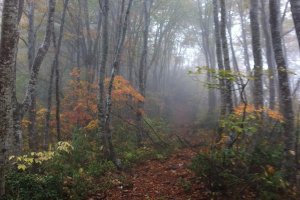 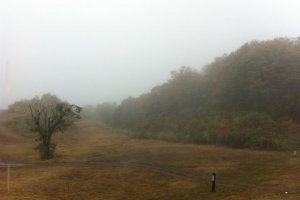 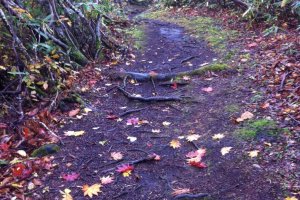