Sail away to Cloud Island

Grey clouds of steam and mist swirl like a dragon in the sky. Mysterious, primal, brooding. A storm is gathering over Inujima, a small fishing and farming village. In the film Cloud Island, the forgotten life of the folk in the Islands of the Seto Inland Sea is gently and quietly chronicled, where time is marked by the postman’s rounds or the arrival of the daily ferry from the mainland. Not much goes on here, well at least on the surface.

It is a quiet, reflective portrait of rural life, of elderly folk pottering around their similarly aged cottages and of onions hanging, drying in the summer breeze. Commissioned for the nearby Inujima Information Center, the film brings into contrast the modern world of Avant Garde fashion and art and the charm of old storytelling, of yellowing photo albums and coat hangers swaying in the breeze. Time here in the Seto Islands is marked by the daily delivery by the postman beautifully portrayed by film maker Fiona Tan. Her life has a number of parallels with Inujima itself. Originally from Indonesia but now resident in the Netherlands, she has moved from her childhood home to the Global Village. It is a thoughtful essay into the nature of moving on and the impact of leaving behind the past. Her works have been exhibited in the Frith Street Gallery, London; and Wako Works of Art, Tokyo.

I am here at Seaman House in the summer of 2016. Like the Inland Sea, the skies outside are foreboding, one minute humid with anticipation, teasing us to go outside, and then another minute, blanketing us with warm water from the heavens.

Unlike the more commercial and tourist oriented hot spots of Naoshima and Takamatsu, there is little activity here at night. No jazz clubs, manga cafes, or karaoke lounges to speak of. Actually once grandma closes the one shelf general store at 6pm, and the last ferry is gone, the pier is as still as a mirror, reflecting the moonlight above. Walking around the shore line, you see the odd local walking their dog, and eventually you feel like a local in this village of less than fifty elderly people, though the number of houses dotted on the shoreline and the mountain trails would suggest a higher number, and indeed, during its heyday there were over 3,000 people here, many employed at the copper refinery next door. In the mornings there is some activity with cranes and such at nearby Inunojima but Inujima itself is devoid of industry now.

In such a small village, it is easy to get to know, or at least recognise the locals. I befriended two of the twenty something guides at the museum, one of whom told me to watch out for the wild boars that swam in from another island. The water may look calm, but I could imagine its depth, and the thought of these boars with big tusks swam for miles in the open current was unnerving. Thankfully, I wasn’t thrashed by a feral boar, but I didn’t want to find out by walking in the forests either.

The rooms at Seaman House are simply furnished. There is no Wi-Fi, and the washing machine is not available for guests to use. There is a small towel that doubles as a dish cloth, and a thin hard mattress that was made bearable by topping it up with another one. I still love this place though. Why? Here was a chance to go camping in a log cabin, with a spacious cathedral like ceiling, probably twice the size of most Tokyo or Osaka studio apartments. Outside there are tables by the open courtyard, where you can enjoy a coffee (there’s full kitchen in the log cabin), or stroll over to the small ceramics gallery / meeting area, which doubles as the check in office. Like most typical islanders, everything is on a casual basis. Knock on the glass window to check in and the old lady will come out and give you the keys and a quick tour. There are 6 log houses here, so you can book the whole camp ground and invite all your friends over, at the risk of increasing the island population by 10 to 20%. The sea is just in front of the entrance, from which you can see the pier in one direction, and the copper refinery museum in the other.

Once all the day trippers have left the island, you can watch the moon rise and sit on the shoreline, listening to the lapping waves, or in the still of the morning, take in the outdoor installations of Art House Inujima, all to yourself. 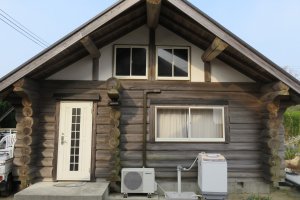 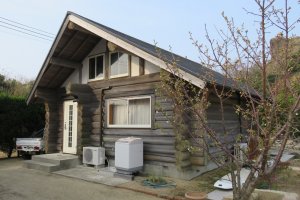 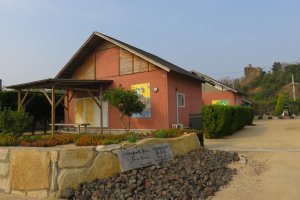 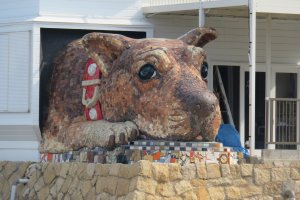 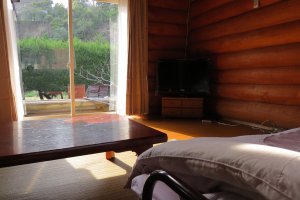 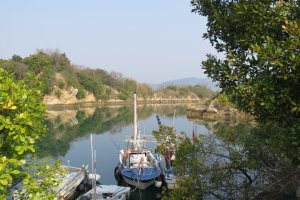 Victoria Vlisides 5 years ago
Bonson, it just looks so pristine. And, you really have a way with words. Thank you!
Reply Show all 1 replies

Bonson Lam Author 5 years ago
This is a great place to de-tox and relax, and soak in the silence. It is interesting that the concept of silence is used in art as well as in music. It is the silence of the reverberation of the bells that you can reflect on its sound, a space where the distractions in your mind is shut out. Thank you for your support, coming from a journalist like you!
Reply

Relinda Puspita 5 years ago
I want to go there.
Reply Show all 1 replies

Bonson Lam Author 5 years ago
You will need lots of time and some patience with connections to get to this hideaway, but the journey itself prepares you for the peace when you are here.
Reply
4 comments in total