The shape of Tokashiki Island on an old map reminded me of two novels I read in my teenage years. The novels were called Day of the Triffids and Lord of the Flies. The former, written by John Wyndham is about plants that can walk and kill people, while the latter, by William Golding, is about schoolboys going feral on some tropical jungle island, two visions that haunted me as I trekked around this relatively uninhabited wild island.

When I booked my accommodation, I was told that the hostel will be filled with schoolboys, so I have to sleep in the shed. On my first hike around the island, I encountered strange plants, fruit that looks like wild pineapple, and signs about dangerous snakes. This is no Disneyland or some invented theme park, but real wilderness, with stray cats and houses that have seen better times.

Our guide Mr. Morino lived on a wild island himself, Tasmania Island in Australia's deep south. On an island filled with stories of Tasmanian Devils, spiders, and snakes, he knows a bit about the dangers of the wild. Like most islanders, he had a deep caramel tan and half-worn sandals, with no pretenses, no outfits that would fit in Harajuku. No wonder he did not return to Tokyo.

Fortunately for most visitors, the signs and stories are more dangerous than the real thing.

Operating from a shed-like shop just meters from the beach, he runs half and full-day kayaking and sailing tours around the island. Today I tried the three-hour morning sea kayak tour with five other participants, all fair and rosy-faced from the big island (otherwise known as Honshu).

Most of the gutsy participants have never kayaked before, or they kayak like they don’t know their left oar from their right. Never mind! Our guide did not know the full extent of our inability, but no matter how helpless we were, we all received a personalized practice session beforehand, making sure we know how to get on and off the two-person kayaks, as well as how to paddle, stop and turn. No detail was spared and being fluent in English and Japanese, no one was left out. So even the timidest landlubber would feel at ease. Of course, our guide had a good incentive to ensure we are safe, ready, and confident, otherwise, it would be a lot of work for him to rescue or tow us if we got into trouble, not that we ever close to that. A cautious man, he advised us not to rent a kayak that day due to the strong currents, but under his supervision, we were safe to go on a guided tour in a group.

We ventured out on a beautiful calm morning, and after some practice rows, headed to the rocky inlets nearby. Little did we know there were beautiful grottoes ahead of us, and one by one, we managed to go inside the narrow openings, and what a delightful adventure it was. Next, we went to a remote island uninhabited and with no sign of human life, except for a statue of two rock singers, barely visible from the shore. We proceeded to climb a steep hill where we could draw breath, relax and appreciate how aquamarine blue and turquoise green the clear waters are, with a short lesson from the guide about the geology of the area.

For our next adventure, he suggested we swim 500 meters out for some snorkeling. It seemed far, but after a quick snorkeling lesson, we were ready to go. It was deceptively easy to swim out with our fins, even easier than kayaking. Despite the initial shiver, the water was warm in the last vestiges of summer. Soon we could see schools of small fish swirling around, oblivious to our presence. Blue, silver, and black they were, plus a few other pastel ones as well. Being wild, they would shy away from our touch and even though the coral is not as fluorescent as those I saw ten years ago, I was surrounded by the feeling of contentment here, being one with nature with this coral garden, with five other swimmers who quickly became friends. You can easily lose yourself and become one of the fish, diving and swimming in 20 meters of water, with perfect visibility and no one to disturb you.

Time was almost forgotten, but with an afternoon class to guide, we headed back to Aharen Beach, having our fill and needing some energy in reserve to pull ourselves back to the shore in the currents. The water looked calm and flat enough in the noonday sun, but like a mirage, it was illusory, especially as the guide and I in the lead boat “volunteered” to tow the other two kayaks back to shore, in case they were blown away. It was a great adventure and I felt transported to another place.

Now, time for some Okinawa Noodles.

Buses meet the ferry from Naha, taking you to the last stop at Aharen Beach 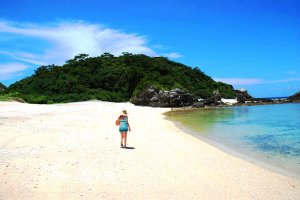 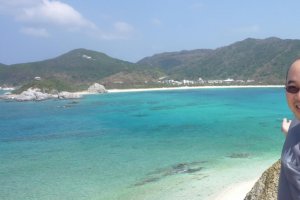