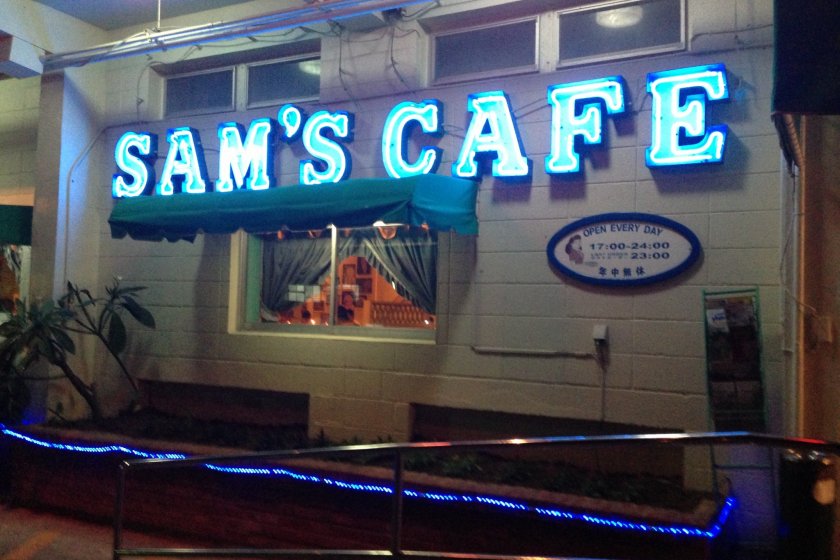 A family restaurant that's quite the romantic getaway

Whether we are showing off Okinawa to a newcomer or just want to have a night out together for a romantic date my wife and I frequently choose one of the Sam’s restaurants in central and southern Okinawa. Sam’s is a small chain of American owned nautical themed restaurants known for fancy dining since 1970. I believe that Sam’s embodies the cosmopolitan spirit of Okinawa better than any other chain or any of the roadside eateries popping up by the tourist resorts in the north or the trendy Chatan corridor on Route 58.

Sam’s Cafe in Kitanakagusuku is, like many of Sam’s restaurants, a bit hard to find as it is tucked away on a side road. The first thing visitors will notice once entering Sam’s Cafe is that it’s not really a cafe but rather a restaurant with expansive seating areas, a full service bar, and lots of Americana decor throughout. 1950's and 1960's music plays gently in the background. The subtly sweet emanations from the kitchen and the greatly oversized guest book at the entrance will reassure any visitor they have chosen a great place to dine.

Same’s menu is largely American inspired with many steak, barbecue, shrimp, fish, chicken and pasta entrees. Nearly every dinner is served with Sam’s homemade soup, a tangy Polynesian accented salad, and bread or steamed rice. Appetizers are very popular at Sam’s due to the unique selections it offers; chopped steak tacos, escargot or cheese tempura, anyone? The most famous part of Sam’s menu is its exotic mixed drinks that often come in uncommon containers, some of which can be taken home as souvenirs. I’ve collected a couple of the Sam’s Shisha Breeze shisha dog mugs but haven’t tried to straw sip my cocktail through a human skull or shark’s head yet.

My wife and I – recently on a date to celebrate the anniversary of the first day we met – selected the baked red snapper with crustacean sauce and crab stuffing, and the garlic New York strip sirloin steak, which was a special feature on the night we visited. The highlight of any visit to Sam’s Cafe is the homemade soup. I’ve never been able to convince the maître d’ to reveal the ingredients, but I believe it is made from Okinawan pumpkins with curry and nutmeg; it’s simply delicious and alone is reason enough to come to Sam’s. The salad is topped with pineapple and served in a wooden bowl. Each meal includes rice or bread. If choosing bread it comes with a container of sweet whipped butter, a red raspberry roll, a white bread roll and a slice of bread that is a medley of fruit flavors, banana included.

I requested that my garlic New York strip sirloin steak be prepared medium. Upon arrival I could see the bright pink meat inside the steak as it came sliced into strips with a savory sauce topped with garlic bits and five large drops of horseradish sauce. The steak also came with rosemary encrusted red potatoes, green beans, carrots and a small cob of corn. The sirloin had a fire-grilled look and taste in each bite. Sam’s Cafe's portions are American sized - so much so that filling up too quickly on an appetizer, soup, salad, and bread may lead to fullness before making it through the main course, let alone making it to dessert.

The baked red snapper came with green beans, corn, carrots and crinkle cut French fries. The fish was covered in mussel sauce – Sam’s calls it crustacean sauce - which is also poured around it. A baked creamy crab blend with a thicker outer layer is served with the red snapper.

We paid our ticket in American Dollars, but Sam’s accepts Japanese yen and all major credit cards, too. It’s advisable to carry dollars and yen while in Okinawa as there are sometimes lower prices to be had in either currency. Unless hindered by a poor conversion rate it is usually cheaper to pay with dollars at Sam’s. Our bill came to $41 for the two entrees and one margarita.

Sam’s Cafe is located in Kitanakagusuku on the first floor of the American Legion Building near the Camp Foster American Marine base. The restaurant is just west of the intersection of Routes 330 and 81. The easiest way to reach Sam’s is by going east off of Route 58 just south of Chatan. English menus are available and most of the waitresses, each dressed in sailor inspired uniforms, are bilingual. Sam’s Cafe is open for dinner daily from 17:00 ~ 24:00. 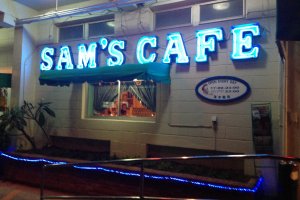 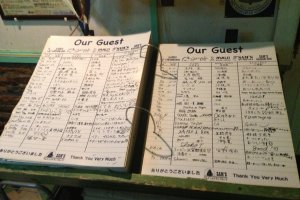 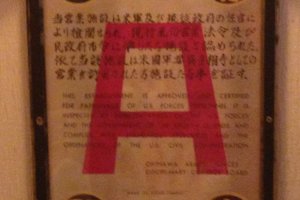 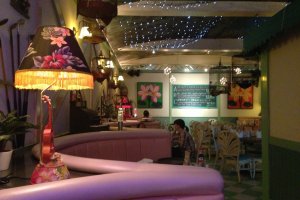 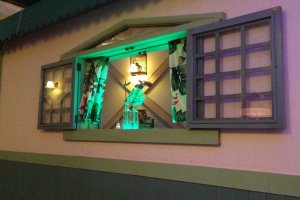 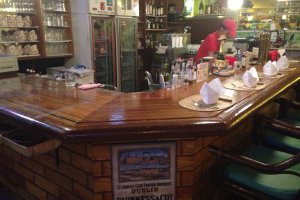 Michael Flemming Author 6 years ago
A shisha dog souvenir mug from Sam’s Cafe has found its way into the Aloha Blossom Restaurant inside the Partnership Shop and Cafe at Southeast Botanical Gardens.
Reply Show all 0 replies

Michael Flemming Author 6 years ago
I just found out that by entering phone numbers of businesses into late model Japan market GPS devices will allow users navigation from any point in Okinawa. I don't think this is unique to Sam's, but I didn't know this type of feature existed until reading about it on Sam's flyers.
Reply Show all 0 replies
2 comments in total