The Kitchen God of Sefa Utaki

The heavens, earth and the deep blue sea

Sefa Utaki is the Okinawan way of acknowledging the “ultimate ancestor”, the creator of the Ryukyu Islands. It is a place of respect, reflection and thanksgiving, much like the shrines in other parts of the world where we pay respect for those who have gone before us. It is a place of reverence for millennia, and its associations with royalty have meant that it is a place that is usually shut to the outside world, consecrated for special ceremonies, such as the inauguration of the Kikoeokimi priestess. While it appears to be nondescript compared with the Valley of Ganglia, I highly recommend booking a guided tour to unveil some of its mysteries.

My guide Hiromi, whose ancestors spanned the length and width of this island, takes me to the Yuinchi, whose closest meaning in English is the kitchen shrine or offering altar for the harvests of the sun, land and sea. There are three rocks, each representing heaven, earth and ocean. In many ways everything we eat comes from the sun, earth and sea, so it is symbolic that there are three rocks at the kitchen shrine.

She explains that nutrition is a form of prosperity, part of the reason why the kitchen deity is revered. Yuinchi means “kitchen” or “place of good harvest”, which explains why there is a flat stone platform, one that reminds me of an altar. It is large enough to present the richness of a good harvest, whether it is from the land or sea, from animals, fish or vegetables. The double meaning also suggests that the fruits of the sea, sky and land, are good enough to be eaten as it is, one that fits in with the natural state of this shrine.

She also explains that this is not a primarily a place to make requests, rather, one where you report and give thanks. On reflection, the idea of giving thanks is a key part of longevity. It focuses our mind on all the blessings that we have on life. Reporting what we have done is also an aspect of respect, where we feel closeness with the ultimate ancestor.

Okinawa was a trading kingdom, whose golden age spanned centuries in what we know today as the medieval times, when brave sailors in small wooden sailing boats took to the seas to places like China, Siam, Java and the various ports of the western Pacific. Of course, if they see the sea as a place of blessing, they would have been filled with thankfulness in making these long trips.

In Okinawa, any discussion of medieval history is bound to be tied to its interactions with China, one that is evident in the history of the kitchen deity, seemingly a mixture of indigenous and imported beliefs.

According to the book; The Kitchen God Returns to Heaven: Popular Culture, Social Knowledge and Folk Beliefs in Vietnam, in the Chinese tradition there are five points in the house associated with deities. These are the kitchen, well, gate, entrance, and the gutter in the centre of the double pitch roof, with the kitchen being the most important. It is home of the hearth, and fire is an important element in preparing ingredients that cannot be eaten raw. The Okinawan version, there is also a deity for the toilet. It is seen that the way we dispose of things is just as important as those that we prepare for eating. Perhaps there is a lesson for us to learn as well. The way we treat our surroundings, and the way that we dispose our trash, so that future generations can appreciate the blessings of the material world, is another way we can say thanks for the people to come.

To preserve the purity of the shrine, the ticket office is located about 400 meters away. Buy your ticket first, and car parking is available at Ganju station in Nanjo and at Cape Chinen Park. There is also buses that stop nearby. Sefa Utaki is closed twice a year (May 1-3 and October 1-3 in the lunar calendar) to preserve the shrine. In the Gregorian calendar for 2019, it is closed on 3-5 June and 28-30 October 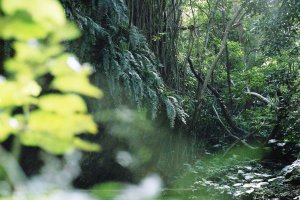 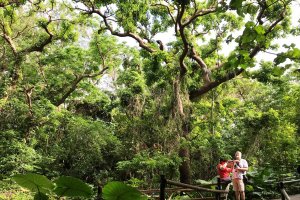 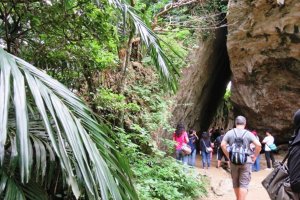 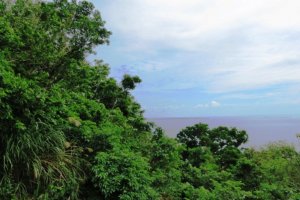 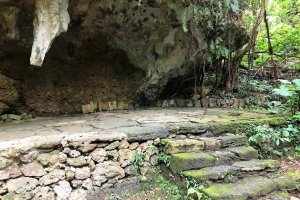 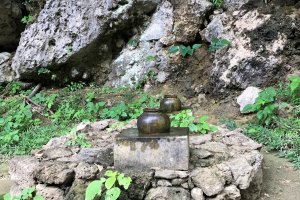 Yui Yamaguchi 3 years ago
Interesting about the three stones at kitchen and the place for offering.
Reply Show all 1 replies

Bonson Lam Author 3 years ago
Yes, it was interesting that the three stones distilled the creation into three elements, earth, sky and sea. These days, we feel so far removed from nature. Can you imagine, if the trees can speak what would it say to us? It is hard to imagine trees having a life form that we can connect to, but it is not that far fetched. There are trees that will starve a branch that is infected with fungus to save itself, eventually dropping that branch into the forest floor.
Reply

Kim 3 years ago
Really appreciated all the explanations you offered about this - felt like I was along for the journey too!
Reply Show all 1 replies

Bonson Lam Author 3 years ago
I really enjoyed the interviews and the research to uncover the mysteries behind this place. It really brings to life a destination that normally may seem nondescript, but there is a lot happening below the surface. This is just the tip of the iceberg in uncovering the rich culture of Okinawa. I am glad you could feel that you were on this journey with me.
Reply
4 comments in total