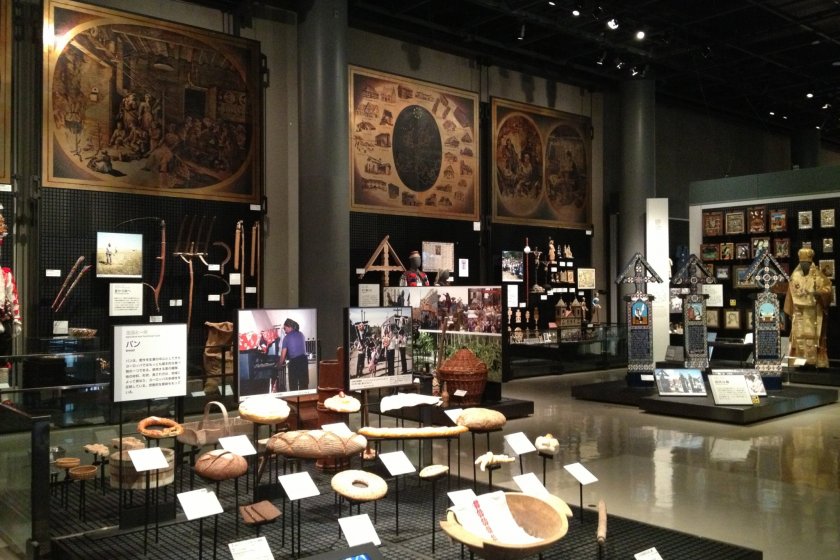 Part of the Europe exhibit, including an exhibit on bread and another on religion

Going to a museum in a foreign country can be a challenge because the signs and information isn’t always in English. Japan’s museums can occasionally be dry or disappointing. So, despite having seen the National Museum of Ethnology called ‘the best museum in Japan’, I kept my expectations low. I was definitely in for a pleasant surprise.

After paying the 420 yen for a ticket, I walked into the exhibit area. I was immediately greeted with an array of colors, objects, and signs. The number of objects on exhibition was astounding. The museum is divided into (several) areas generally based on geographic region: Americas, Europe, Oceania, Africa, and Asia (which is subdivided into several smaller sections, such as Central Asia or Japan). There are also a couple of special thematic cross-cultural areas based on Music and Language. Within each region, there are different topics that are addressed, for example Clothing, Art, Industry, or Religion.

The reason this museum is so great is the large amount of ethnographic objects on display. The exhibits are well-planned, making the sheer volume of items to look at not overwhelming. I saw yurts, hats, guitars, food, cars, boats, puppets, totem poles, clothing, and art. The variety and color of fascinating things to see from all over the world make this museum amazing. The focus on everyday life is also unique and makes it easy to understand and connect with the cultures featured in the museum.

The National of Museum of Ethnology in Osaka (or ‘Minpaku’) is located on the grounds of the Expo ’70. The easiest way to get to the museum involves taking the Osaka monorail to either Banpaku-Kinen-Koen Station or Higashiguchi Station. You could also take a bus. The Natural and Cultural Gardens are nearby, as well as a Japan Folk Crafts Museum. The Expo Commemoration Park itself is beautiful and worth wandering around. I walked to the museum from Higashiguchi Station, which takes about 15 minutes. Some areas had signs pointing in the correct direction, but some areas were difficult to figure out where to go. I’d suggest checking the official website before going because they have a guide with pictures to show you were to go.

Most of the areas have signage in English, although some of the thematic signs and the explanations are not in English. You can get a digital guide in Japanese, English, Chinese, or Korean at the information desk for free. I opted not to do this, since I enjoy just wandering and looking at the objects, but it might be a good idea. Much of the Asia section, especially Southeast Asia and Central Asia, have no English signs, unfortunately. However, the objects can speak for themselves in many cases. I also recommend a visit to the museum’s restaurant. They feature dishes from different countries, and the meal I had there was absolutely delicious.

If you are interested in world cultures or anthropology, the National of Museum of Ethnology is a must-visit. It felt a little weird to be touring a museum about other countries while in Japan, but the Japanese exhibit itself is worth a visit. The attractive exhibits, large number of artifacts, and interesting topics make this a great museum. 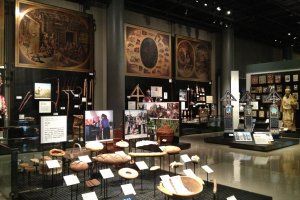 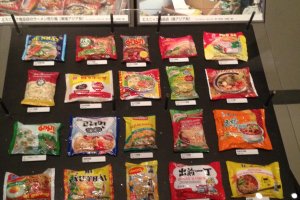 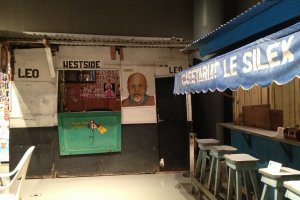 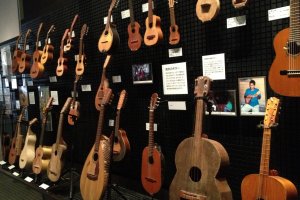 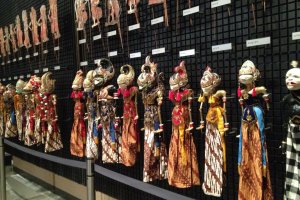 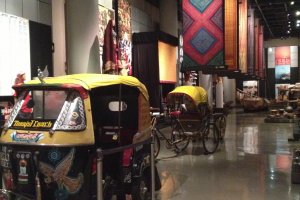 Sherilyn Siy a year ago
Great displays! I would like to see the instant noodles from around the world and the replica of an African building/side street. Museums that give you a glimpse into the lives of other people are cool.
Reply Show all 0 replies

Bonson Lam 2 years ago
This is a wonderful way to discover the riches of many overlooked cultures. Did you see any exhibits on Ainu art and textiles here, or at the Japan Folk Crafts Museum?
Reply Show all 0 replies
2 comments in total