The Zen of Ten Pin Bowling in Japan

Mr Shibata takes an almost zen like approach to bowling. He stretches, takes off his watch, turns off his phone, and puts on his special bowling gloves. Each shot is a masterpiece, a unity of mind and body. Little does he know of the origin of bowls, where in Germany people would take kegels to church to absolve themselves over a thousand years ago.

In the 1970's and 80's, ten pin bowling had its golden age in Japan and the United States. There were three level bowling extravaganzas, with over a hundred lanes, gift shops and restaurants. It was the temple to bowling, like a bowling palace on steroids. Die hards would come here every day to train for the tournament; such was its popularity during the heyday of bowling.

Today, bowling remains one of the most popular sports in both countries, and you can experience the excitement and precision at the Tokori Bowl in Haruki, next to La Park Kispa in Kishiwada City. But be careful, the game can be addictive. The other day, some employees in Sacramento were busted bowling during work hours.

There are thirty lanes in this bowling alley, including ten lanes in a separate private area for parties or tournaments. And if you can’t bowl during working hours, this facility is open until 2 am on Sundays and weeknights, and 5 am on Friday and Saturday nights, as well as any night before a public holiday, making it a great place to shake off your jet lag if you have just landed at Kansai International Airport just 30 minutes away.

A game starts from just 130 yen after 10 pm on weeknights, to a maximum of 250 yen during their peak hour, being from 6 pm to 10 pm on weekends. You can join up as a member and get over 10% discount, and there are discounts for multiple game packs. To ensure children and teenagers get their sleep, only adults can play past 10 pm.

Alcoholic drinks, however, are served during the day as well, with wheat and potato based shochu spirits from 300 yen, as well as glasses of wine, beer and cocktail from 300 yen as well. Having a Gin and Tonic on the rocks, a Moscow Mule or Cassis Orange while watching Mr Shibata can send you back to the eighties. Modern inventions, such as alcohol-free beer also exists, should you wish to concentrate on the game. If you need a coke or iced coffee to keep you awake, the soft drinks here are from 100 yen, making it cheaper than most vending machines. For dessert, Ice cream or hot cakes are available from 200 yen.

If you are hungry, the yakisoba noodles are 350 yen, while the Carbonara pizza is at an astronomical price of 600 yen! At this rate, you might fit in a 2 course meal with a drink for 1,000 yen. If that is too much for you, there are always the edamame beans or crispy sausages, hot dogs or French fries, starting from 200 yen each. No wonder people come here every day to bowl.

The bowling alley is part of the Kispa La Park complex, next to route 204, a main road between Osaka City and Kansai International Airport. It is also an easy 3 minute walk to Haruki Station, which is a 30 minute ride from the airport. Kispa La Park has discount and duty free goods as well as several restaurants. 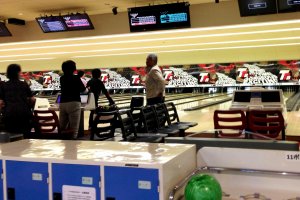 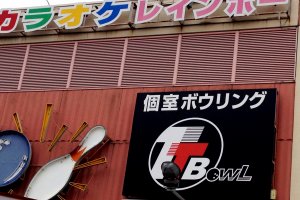 Bonson Lam Author 5 years ago
There is a certain charm to bowling here that is hard to describe, a kind of retro chic combined with the zen like repetition of the bowler's movement. I can imagine that it can be unexpectedly addictive, with or without the shochu...
Reply Show all 0 replies

Saskia Gilmour 5 years ago
Wow! This bowling alley sure puts my local ones to shame! It's understandable why it's such a popular past-time. I wonder if some shochu during a daylight hours bowl would increase my strike rate...
Reply Show all 0 replies
2 comments in total