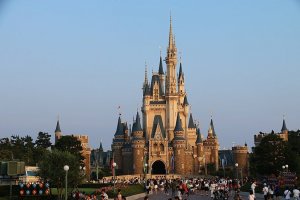 Tokyo Disneyland is a theme park based on the films produced by Walt Disney. It was the first Disney theme park to open outside the United States in 1983. It quickly became so popular that in 2018 it became the third most popular theme park with around 17.9 million visitors Although this means that it can get a bit crowded quickly, large open areas have been specially designed to cater to the enthusiastic crowds.

Enjoy a day at Tokyo Disneyland! Purchase your tickets hassle free and have them delivered to your hotel accommodation in Japan.

Tokyo Disneyland is a quick walk, or one stop on the Disney Resort Line Monorail (¥260), from Maihama Station on JR’s Keiyo Line.

For almost thirty years, Tokyo Disneyland has entertained millions of guests throughout its 115 acres of attractions, shopping areas..

A fun and exciting wonderful Japanese version of the Disney international theme parks.

Tokyo DIsneyland. Imagine a place where a child is introduced to a fantasy magical dream world. A memory they will carry on fo..

A fun, magical day at Disneyland Tokyo everything is efficiently run and clean, staff are friendly, there is easy access from Tokyo..

Tokyo Disneyland for the First Time

Going to Tokyo Disneyland was a dream come true! Nadhira Nisrina describes her firsts in this article: first for Tokyo Disney,..

The highlight of Tokyo Disneyland is the nighttime Tokyo Electrical Parade Dreamlights and you will just admire its gorgeousne..

The wait is over. On September 28th, Tokyo Disneyland will finally open their large-scale development that stretches across Fantasyland,..

On April 5, 2022, Tokyo Disney Resort opened the doors to its Toy Story Hotel. The magical hotel encapsulates the charm of the beloved..

Stay at Hotel MyStays Maihama just next door to the Disney Resort and with perfect access to Tokyo and Narita Airport.

Thick and Rich Ramen in Tokyo

In this video Brian and Rina visit "Otodo Shokudo" in Kasai, eastern Tokyo. The shop’s most popular item, the Kiwami Nikutama ..

Tokyo DisneySea opened in September 2001 and was the second of the two theme parks at Tokyo Disney Resort. The park enjoyed great popularity from the..

Japan's largest nightclub was born in 2002 and re-defined the Tokyo waterside area of Shin-Kiba that it called home. This mega Tokyo club came to..

Tokyo Big Sight, also known by its official name of Tokyo International Exhibition Center, is the largest convention center in Japan. Located in the Odaiba..