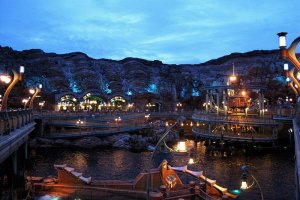 This Disney park is unique in that it was inspired by myths and legends of the sea. It just consists of thematic areas: Mediterranean Harbor, Mysterious Island, Mermaid Lagoon, Arabian Coast, Lonely River Delta, Harbor Discovery and American Waterfront.

Tokyo DisneySea is located in Chiba Prefecture and therefore outside of Tokyo, but is easily accessible by public transport.

Enjoy a day at Tokyo DisneySea! Purchase your tickets hassle free and have them delivered to your hotel accommodation in Japan.

A quick walk, or three stops on the Disney Resort Line Monorail, from Maihama Station on JR’s Keiyo Line.

A Day at Disney Sea

Tokyo Disney Sea has much more of a focus on couples rather than families, but it really is what you make it.

Tokyo Disneyland and Tokyo DisneySea attracted a combined 31.38 million visitors in fiscal 2014, a record high for the 3rd consecutive..

Tokyo DisneySea looks amazing at night and it's the perfect time to take a look at the detail of each world.

Tokyo DisneySea is the second park that Southern California could have had instead of California Adventure. It boasts seven un..

Tokyo DisneySea in One Day

Tokyo DisneySea in One Day! This nautical themed amusement park by Disney is unique to Japan and after watching this video you will..

My Birthday at Tokyo DisneySea

I was mesmerized by the bright colors and designs of the rides as well as how much thought was put into the detail of each part..

Based on the popular worldwide attraction 'Soarin' Around the World, this flight motion-simulator features brand new scenes..

Guests are to be caught in the midst of their battle in the "Pirates Summer 'Get Wet'" harbor show at the Mediterranean..

Your favorite Disney characters are back for another celebration of Pixar stories this winter at Tokyo Disney Sea. This limite..

On April 5, 2022, Tokyo Disney Resort opened the doors to its Toy Story Hotel. The magical hotel encapsulates the charm of the beloved..

Stay at Hotel MyStays Maihama just next door to the Disney Resort and with perfect access to Tokyo and Narita Airport.

Thick and Rich Ramen in Tokyo

In this video Brian and Rina visit "Otodo Shokudo" in Kasai, eastern Tokyo. The shop’s most popular item, the Kiwami Nikutama ..

Edomaekisen is a yakatabune company serving up okonomiyaki, monjayaki and yakisoba onboard a moving boat

Tokyo Disneyland is a theme park based on the films produced by Walt Disney. It was the first Disney theme park to open outside the United States in 1983...

Japan's largest nightclub was born in 2002 and re-defined the Tokyo waterside area of Shin-Kiba that it called home. This mega Tokyo club came to..

Tokyo Big Sight, also known by its official name of Tokyo International Exhibition Center, is the largest convention center in Japan. Located in the Odaiba..