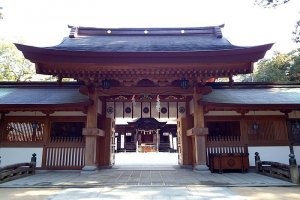 In the middle of Honshu and Shikoku, there's an island named Omishima which plays host to a Shinto shrine that served as a samurai mecca for more than a millennium. Despite being the largest island in the Seto Inland Sea and having much else to offer, Oyamazumi Shrine is a must-see, especially for those interested in samurai history and legend. Nature lovers will marvel too: Oyamazumi is nestled in a grove of hundreds of camphor trees, with some gigantic ones that are much older than the ancient shrine itself.

The site is replete with stories. As a place of worship for Oyamazumi no Okami—the god of mountain, sea and warfare, as well as the brother of the sun goddess Amaterasu—samurai, have embarked on pilgrimages to Omishima since the 500s to pray for military success. As a show of thanks they sheathed their weapons. Nowadays the main hall, the worship hall and the treasure hall contain many important artifacts, including swords taller than the most people and a breastplate that belonged to Tsuruhime, a female warrior who in the 16th century defended the island from an invading clan—several times. Other National Treasures, still scarred from centuries-old conflict, are up for display. Outside next to the gate is a small rice paddy whose yield is used for the Otaue Matsuri, or the Rice Planting Festival, in early June. This festival in particular involves a local man challenging a rice spirit in three rounds of sumo wrestling (and loses, of course).

Although the shrine itself is free to enter, you can pay ¥1,000 to explore the treasure hall and other museums. The Omishima Maritime Museum contains a boat and several marine specimens once claimed by Emperor Hirohito during his activities as a marine biologist. Thankfully, with the construction of the Shimanami Expressway Oyamazumi is not as remote as it used to be, but a reverential atmosphere certainly remains.

20 minutes by car from Omishima Interchange on Nishi Seto Expressway.

Bekku Oyamazumi Shrine in Imabari is divided into three parts, each in a different style. It makes an interesting contrast with..

Oyamazumi Shrine is like a natural cathedral. It's home to a large collection of historical weapons and armour.

If you're planning to cross the Shimanami Kaido, it's best to stay overnight on one of the islands, and Setoda Private Hostel..

Tairyo is an extraordinarily popular seafood restaurant on Omishima. Be prepared to queue for the cheap and delicious cooked and..

Shimanami no Eki Mishima is a road station located roughly in the middle of Omishima Island, close to Oyamazumi Shrine.

The path to Oku-no-In on Omishima Island is a wonderful winding track to nothing in particular (except for a rather nice toilet)...

Omishima Art Museum is a gallery of modern art on Omishima Island, part of the Shimanami Kaido. It holds high quality rotating exhibitions...