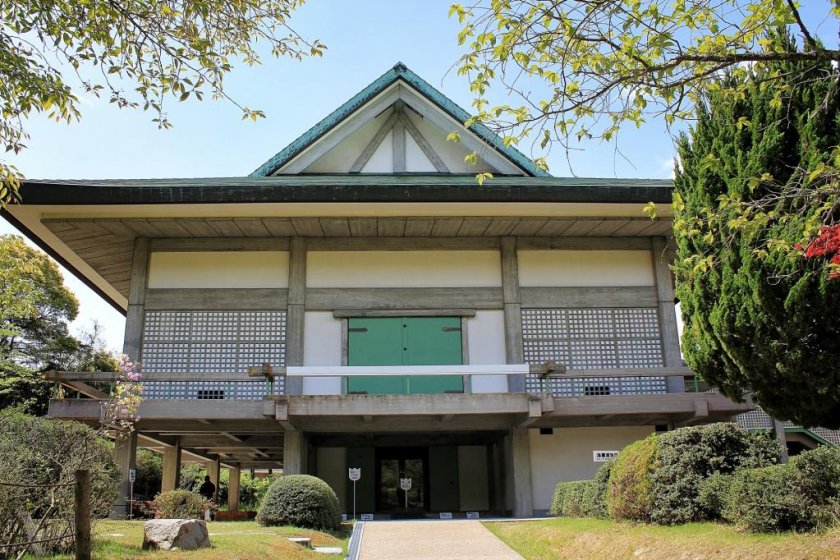 Weapons and armour dating back to the Heian Period

The Oyamazumi Shrine Treasure Hall from outside

As one of the most historically significant shrines in Japan, and beautiful to boot, Oyamazumi Shrine on Omishima Island is worth visiting in its own right. But another reason to visit the shrine is the National Treasure Hall, which holds a fine collection of ancient samurai weaponry and shrine statuary. Warriors visited the shrine to pray for victory, and the weapons and armour were offered to the shrine in gratitude for success in battle.

The Treasure Hall is a rather foreboding windowless concrete building. It’s set in a pleasant garden. You have to take off your shoes and put on some uncomfortable, slippery slippers to enter. The first floor has a room full of naked blades—swords and naginata (halberds) displayed without handles or scabbards. Unlike many of the blades on display in Japan, these have chips missing from the edges and dings in the sides, which suggest use in real battles.

As you come up stairs to the second floor, you encounter four massive shrine guardians holding bows and arrows. They have scary staring eyes and down turned mouths, and they present a truly dramatic sight. One of them is coloured black for reasons that aren’t apparent. These fellows date from 1323 and they’re in excellent condition. There are also some improbably large swords on this floor. Known as odachi, they have a total length of 180 cm and weigh 4,950 g. They must have dwarfed the men who carried them.

The top floor has elaborate armour belonging to Kono Michinobu from 1190, shogun Minamoto Yoritomo from around the same time, and Kono Michinari from 1281. Unlike the bulky metal armour of the West, this samurai armour looks light and flexible. Most of the exhibits are in an excellent state of preservation. Some of the old swords were gaudily caparisoned, and one from 1166 is positively dandy in its proportions and decoration. The oldest sword on display is from the Heian around 950. It's very small, thin and dainty looking. One corner features arrows of all varieties, some with feathers still attached. Not everything is well preserved however. There’s a section devoted to some knackered-looking swords, with pitifully worm eaten handles, although the metal is still in perfect condition. The tanto daggers are tiny but viciously pointed and sharp.

The National Treasure Hall is a separate building. It has suits of armour belonging to all sorts of historical bigwigs, including the armour bodice that belonged to a female samurai who went by the name Ohori Yasumochi no Musume Tsuruhime. Each suit of armour is housed in its own wood and glass case in a dimly lit room, creating a heavy and portentous atmosphere.

Labels in English give the name of the type of weapon or armour, the owner where known, and the date, but nothing else. Photography is not permitted inside the buildings. The 1,000 yen admission also includes entry to the adjacent Omishima Maritime Museum.

Find out more about Oyamazumi Shrine. 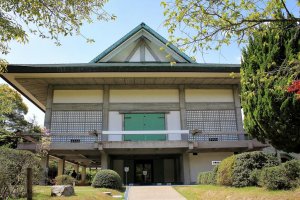 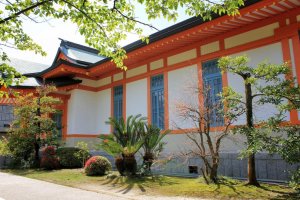 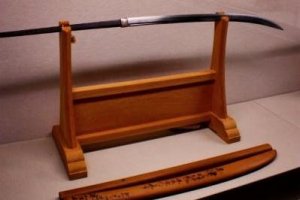 Sleiman Azizi a year ago
The name alone makes it sound worth the visit. I mean, 'National Treasure Hall'?!? Awesome stuff.
Reply Show all 0 replies

Elizabeth S a year ago
The number of blades and suits of armors attributed to great warriors at this museum is astounding. The museum is said to contain 80% of Japan's national treasure weapons.
Reply Show all 0 replies
2 comments in total