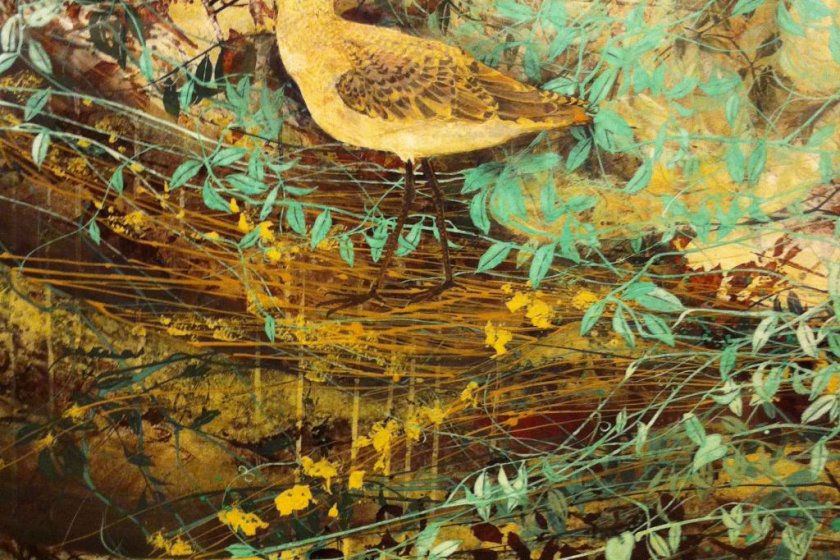 One of four excellent art galleries on Omishima Island

Detail of a decorative bird

The Omishima Art Museum is located in the waist of the island, across the road from the ancient Oyamazumi Shrine. There’s abundant space to park in this area, and the entrance to the car park is just before the museum if you’re coming from the east.

The art museum appears as a rather vacant structure of pillars and glass, and once inside, you become aware that there’s not much art to be seen here—this is just the lobby and café. After you buy your ticket for 500 yen, you pass through a corridor outside into the actual gallery area where everything is a good deal more robust.

There are four main rooms, of which all but the last are used for rotating and special exhibitions. I was there in August and the first room was dedicated to paintings evoking summer. A multimedia painting by local artist Kyosuke Chinai particularly impressed me with its evocation of a young girl trying on a kimono. Scraps of actual kimono material incorporated in the work give it the quality of a remembered event. Another delicate pen and watercolor work by Tekison Uda showing the summer vegetable known as bitter gourd is sufficiently real to call to mind the pungent smell that the vine gives off.

When I visited, the second room was devoted to animals, and there were some dramatic, not to say edgy portrayals of animals from all over the world. An elephant was represented in a square canvas just by an eye, a tusk, an ear, and wrinkles, and yet from these abstract elements, I was sure I could see the whole elephant. Another rather droll painting showed a dog in a rainstorm, but on closer inspection, the rain was finely drawn vines.

The third room is a sitting room with photos of the artist in the final room at work. The artist is Toshio Tabuchi, a modern painter of poster-like images, some of which cover a whole wall and are impressive in their scale and detail.

A visit to the Omishima Art Museum won’t take you very long, but the selection of works is stimulating and rewarding. The museum makes something of a set for the art lover with the Tokoro Museum, the Toyo Ito Museum of Architecture, and the Ken Iwata Mother and Child Museum, also on Omishima Island. 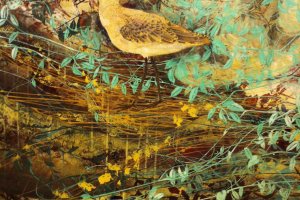 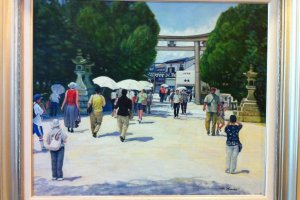 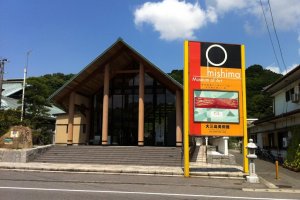