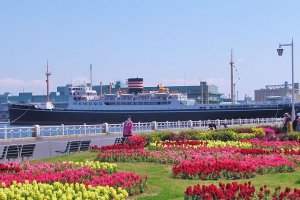 Yamashita Park (山下公園) is a public park along YokoThe Yamashita Park is considered the first coastal park in Japan and is located directly in front of the port of Yokohama. It extends almost 700 meters from the east side of Osanbashi to the Yamashita Pier. It was founded in 1930 by filling the area with the debris of the great Kanto earthquake opened.

The park includes a meadow of grass, a rose garden, the "Little Girl in Red Shoes" statue, the "Guardian of the Water" statue, which is a gift from San Diego, a sister city of Yokohama, and the memorial to that Song "" Kamome no Suihei-san (Seagull Sailor) "", a water staircase and a stage.

The former cargo and passenger ship Hikawamaru is anchored here.hama's waterfront. The park was built using landfill from the remains of buildings destroyed in the Great Kanto Earthquake of 1923.

As one of the best-known landmarks of Yokohama city, Yamashita Park attracts a lot of tourists as well as local citizens day and..

Come and experience one of Yokohama`s most popular attractions during the spring; everything covered in a rich and colorful blanket..

Yamashita Park is the most popular park among them. Locals always come here to refresh themselves, and tourists can’t resist i..

Enjoy a Day at Yamashita Park

Yamashita Park: One of the most iconic places in the port city, Yokohama! This is my favorite park!

The Future Rose Garden, in Yamashita Park, Yokohama opens each spring in May & June and autumn in October & November. Reopened in..

Yokohama's dragon boat races take place off of Yamashita Park every year in late May and early June.

Navios Yokohama is a reasonably priced hotel in an excellent location in the Aka-Renga Shoping District. The view from the guest..

Kanteibyo Temple (関帝廟) is a spiritual landmark in Yokohama’s Chinatown. It shines like a beacon of faith with its vibrant red exterior and intric..