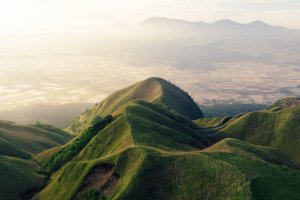 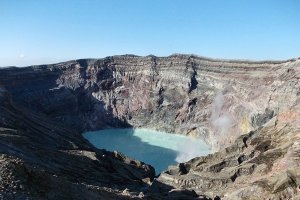 Mount Aso, the largest active volcano in Japan, is located in Kumamoto, Kyushu. Arguably the prefecture's biggest attraction, Mount Aso is a prime hiking and sightseeing spot that's part of the Aso Kuju National Park. Mt. Aso's peak is at a towering 1,592 meters above sea level, forming a stunning mountainside view from the Aso city.

Mt. Aso itself consists of five peaks — Mt. Naka, Mt. Kijiima, Mt. Eboshi, Mt. Neko, and Mt. Taka. It's believed that Mt. Aso was formed by four large eruptions that happened more than 200,000 years ago. The regular volcanic activity contributed to the formation of the large caldera that is also known as Nakadake crater. A caldera is larger than an ordinary crater, and the one on Mt. Aso is one of the largest in the world.

The Nakadake crater holds stunning blue water, which emits sulfuric fumes and is dangerously hot despite its icy appearance. The Aso Volcano Crater center monitors the crater's activity levels and updates daily on visitor restrictions to ensure everyone's safety. As of April 2020, access to the crater is currently closed due to increased volcanic activity. The ropeway, roads, and trails leading to the crater are closed until further notice. Mount Aso's latest eruption was in 2016. The crater can usually be accessed via ropeway, a bus from JR Aso Station, by private car, or a 30-minute walk from the bus stop.

80-minute drive from Kumamoto via the Kumamoto Exit

To Nakadake Crater: (check if routes are open to visitors)

When it reopens to the public again, be sure to catch the awesome sight of Japan's largest and most active volcano

Kyushu's Mt. Aso boasts one of the largest calderas in the world. Come explore the beautiful area surrounding this active volcano...

The Magic of Mt. Aso

When gazing down from above on to the somewhat un-imposing peak of Mt Aso, it is hard to believe that not only is this one of ..

The Volcanic Desert of Aso Caldera

The further you walk the more bizarre the landscape becomes, like a new not yet discovered planet. A lunar landscape I would say...

Autumn in the Mt Aso Highlands

Winter in the Mt Aso region

Even the mountains of Kyushu see snow in the winter months!

A grassy plateau sits atop the five peaks of Mt Aso, one of Japan's most impressive volcanoes.

Things to Do around Aso Volcano

If you want to feel and see the power of nature, you have to go there and have a look into this huge steaming crater, emitting fumes..

A Night in a Farmhouse in Aso

A must-stay if you visit Mount Aso in Kumamoto: A traditional farmhouse with lots of atmosphere and outstanding organically gr..

Aso Farm Land and Its Surroundings

This park is the epitome of the Japanese word genki meaning childlike, happiness and energy.

The little lane narrowed the further it got from the main road and I began to wonder if there is indeed a temple of vegan deli..

Aso Shrine is a Shinto Shrine in Aso, Kumamoto Prefecture, Japan. Aso is one of the oldest shrines in Japan. This shrine holds several Important Cul..

Aso Nature Land was established in 2005 as a place for people to experience outdoor activities in the midst of incredible natural vistas. This professional..

The Aso-Kuju National Park in Kyushu and the magnificent bowl-shaped caldera of Mount Aso is a spectacular sight to behold. Hiking..