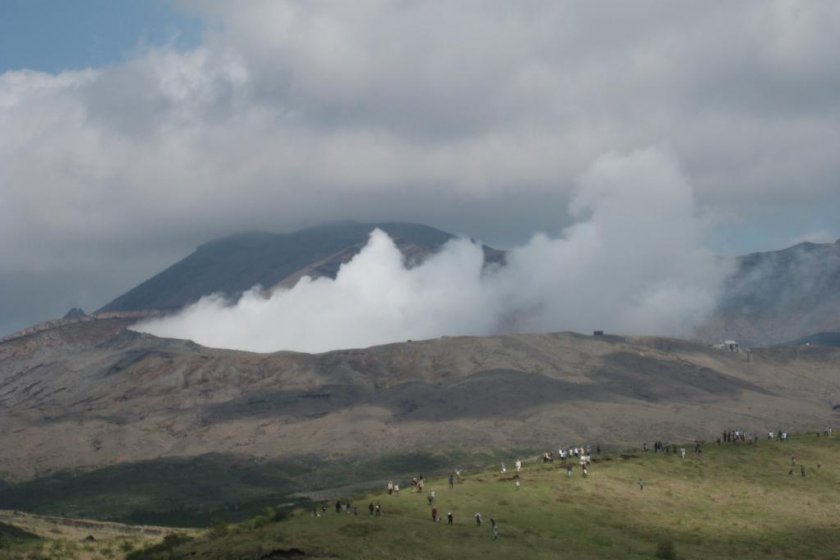 Toxic gas clouds are released in the air

The island of Kyushu is known for its volcanic activity, and Mt. Aso—an active volcano with one of the largest calderas in the world (up to 25 km in diameter!)—should be near the top of anyone’s Kyushu must-see list!

Mt. Aso is a complex volcanic area consisting of an outer ring surrounding several peaks and craters. It is thought that Mt. Aso was created by four eruptions, the largest and most recent occurring about 90,000 years ago. Mt. Aso’s five main peaks rise up from the crater that formed when the ground collapsed to fill the huge underground space created by spewed magma.

Mt. Aso’s unique ropeway (858 m, 4 min. run time) gives visitors unusual access to the rim of the active volcano. Unfortunately, it is often closed due to the noxious gases pouring from the caldera, and I was unable to take it the day I went. If you are lucky enough to go, you will smell the sulfur and see the blue pool of water spewing volcanic gases up close. A short walking path with various look-outs allows amazing views of the area. There are also shelter dugouts in case of emergency (eruption).

However, even when the ropeway is closed, there is plenty to do in the Mt. Aso area. Instead of going all the way up to the Naka-dake caldera I took the bus to Kusa-senri, a big grass-covered plateau that was once a crater. With its crazy landforms, grazing horses and cows, dormant volcanic cone, two big ponds, and nice view of the billowing gas and volcanic smoke from the main caldera it almost made me forget how disappointed I was about the ropeway. The well-done (though expensive) museum there features a live camera from inside the crater showing the bright blue hot water pool, an IMAX-like documentary movie, and other cool displays. On the plain, I took lots of pictures of the volcano and just wandered around other people who were picnicking or riding horses. For a hefty price people can take quick helicopter trips up over the crater so it was fun to watch them departing and returning.

Trekking and other opportunities for exploration abound. Nearby Komezuka is an arresting grassy hill rising almost 1000 m in a beautiful conical shape with a flat top. It is said that the hill was created by a god of Aso who harvested the rice crops and piled them up. An eco-museum, shrines, springs, and other dormant craters are additional options.

Aso is a small, quiet town centered around the JR station. It has a few hostels, restaurants, and public baths, and the great views and easy access to the volcano make it a nice place to crash for the night.

The views at Mt. Aso are truly incredible. It is the only place in Japan you can get so close to an active volcano. Check it out!

Find out more about Mount Aso. 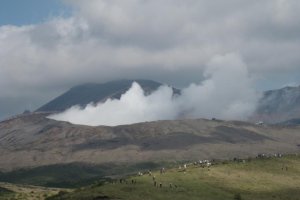 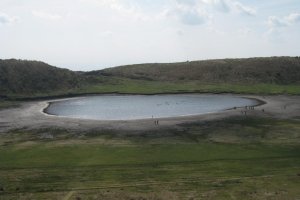 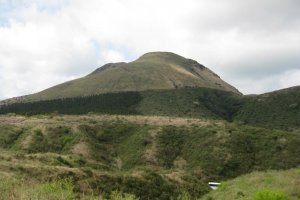 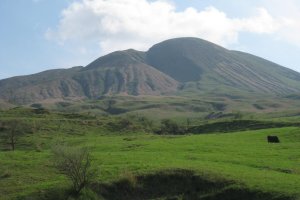 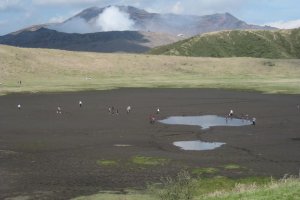 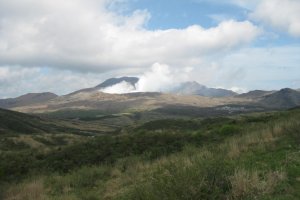 Kim 4 months ago
Some of the landscapes here look like something from another world!
Reply Show all 0 replies

Yoshimi Dan 4 months ago
These photos are stunning, what a lovely location!

Elena Daurtseva a year ago
The photo of clouds of gas raising over the caldera is great!
Reply Show all 0 replies

Yui Yamaguchi 7 years ago
Hi Dana, I love your photo of Mt. Aso. Can I use your photo for Japan Travel - Kumamoto Facebook cover?
Reply Show all 0 replies
7 comments in total