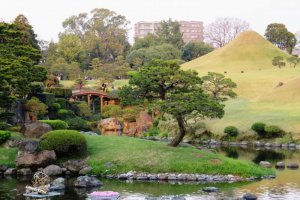 Suizenji Jojuen is a traditional Japanese landscape garden that was laid out in the late 1600s. Due to its enormous size of 64 hectares, it is often referred to as Suizenji Park. Originally it was planned by Prince Hosokawa Tadatoshi to enjoy tea there in peace Its name comes from a former Buddhist temple there, while the garden now houses a Shinto shrine in which the Hosokawa family is buried.

The garden is supposed to represent the 53 stations of the old Tokaido Street, a former trade route that ran between Tokyo and Kyoto. The highlight is the miniature representation of Mount Fuji, as well as a reduced form of the Fushimi Inari Shrine in Kyoto. The tea house there originally comes from the Imperial Palace in Kyoto and is open to the public.

The Suizenji Jojuen is located in the city of Kumamoto on the southern main island of Kyushu and, along with the Kumamoto Castle, is one of the city's main attractions.

A Day in Suizenji Gardens

Rich with history and natural beauty, Suizenji Garden will capture the hearts of all those who enter, transporting them back to..

The cherry blossom comes but once a year, and in a few days, it vanishes, scattered by the wind. Poets and lovers have gathere..

A beautiful Japanese garden in Kumamoto City with tons of green nature and animals of various kinds.

Suizen-ji, Kumamoto's 400-year-old traditional garden, is an easy jaunt from the city's castle and a must see for any visitor...

Suizenji is in an historical part of Kumamoto City. So old, that in 1636, Lord Hosakawa chose this site to build his garden, one..

Over 66,000 purple irises in several varieties bloom in the Takaseura River in late May to early June during the Tamana Iris F..

The Presidential Suite room at Hotel Nikko Kumamoto has a great view of Kumamoto Castle.

Cafe La Paix is a simple, relaxing cafe located just around the corner from Kumamoto's popular Suizen-ji Garden and litera..

Kumamon Square is the" "office" "of the famous mascot Kumamon of Kumamoto Prefecture. The bear mascot was created in 2011 to improve public relations..

Lafcadio Hearn was born in Greece in 1850 to a father from Ireland and a mother from Greece. He was a British explorer who came to Japan in the 18th century..

Kumamoto Castle is the third largest castle in Japan and one of its most popular historic sites. Originally built in the early 1600s by renowned castle..