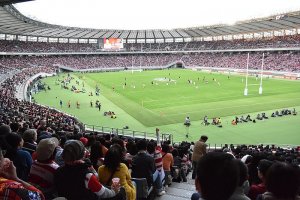 Ajinomoto Stadium was Tokyo's official stadium for the 2019 Rugby World Cup. It is easily accessible from Tokyo Station in just 40 minutes. The Ajinomoto Stadium is also a 20-minute drive from Shinjuku Station.

This open-dome stadium can seat almost 50,000 people. It opened in March 2001. The grandstand is divided into two levels, an upper and a lower one. If you get hungry during the game, the stadium has a variety of restaurants serving both Japanese and Western food.

Besides being home to two J-League teams (professional football league in Japan), the stadium is also known as the venue for many other events such as concerts, flea markets, etc.

From Tokyo Station take the JR Yamanote for Shinjuku Station and transfer to the Keio Line. From Tobitakyu Station it’s a 5-minute walk to Ajinomoto Stadium.

At the 2020 Olympic Games, Tokyo Stadium will host football and rugby as well as modern pentathlon, including the swimming, fencing,..

Oakhouse Social Residence Koganei in Tokyo's Koganei suburb is a share house that offers long-term residence to both Japanese and international residents...

Staying in suburban Tokyo is a more peaceful and less expensive alternative to staying in the heart of the busy city.

A very nice and comfortable share house with a tight and friendly community.

Located near Shin-Yurigaoka Station, den en poteto offers a calm, rustic interior space at its bakcstreet patisserie setting. They offer both a lunch..

Yomiuri Land is a Japanese theme park that first opened in 1964. It is located on a mountainside and features rides such as roller coasters and water..

The Ghibli Museum is Japan’s must-see spot for fans of the highly acclaimed films produced by Hayao Miyazaki. Opened in 2001, the museum welcomes excited..

Koganei Park is the second largest park in the Tokyo metropolitan area, known as a cherry blossom hotspot.