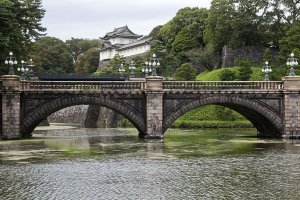 The Imperial Palace is both literally and figuratively a hub of the Japanese capital. Located in central Tokyo, the palace grounds were once home to Edo Castle, the seat of government of the Tokugawa shogunate and the center around which the country is almost three Spun for centuries.

When the capital moved from Kyoto to Tokyo in the 1860s, the imperial family traveled with it, and a new residence was built for them on the site of the former castle. Today the palace is still the home of the Japanese imperial family and parts of the site can be visited with a guide.

The Tokyo Imperial Palace is a beautiful area comprised of gardens and old buildings. It is where the Emperor of Japan has his main..

Tranquility at Tokyo Imperial Palace is best experienced through a slow stroll on a sunny day.

Forming the main entrance of Imperial Palace, with a series of scenery as magnificent as the main grounds

Akemashite Omedeto Gozaimasu (Happy New Year)! Celebrate the New Year by receiving a New Year Greeting from Their Majesties the..

The Imperial Palace East Gardens are as close as many will get to the Emperor in Tokyo. They're also rather beautiful and a..

The Imperial Palace East Gardens is very beautiful place to rest and feast your eyes in the center of Tokyo.

The Imperial Place running loop is a very enjoyable 5km route that runs alongside the palace moat in Tokyo. During springtime the..

East Garden of the Imperial Palace

Gardens located in the center of Tokyo that are a great place to breathe some fresh air as well as to find out about the life of..

If you have time for only one run in Tokyo, you must do the Imperial Palace course. Home to the most famous family in Japan, the..

Inside the Imperial Palace's moat, the east garden gives you a both a tranquil green space to relax beside its pond, and a lookout..

The Museum of Imperial Collections

I believe the Imperial Palace is one of the most famous places in Japan. Yet, I wonder how many people know that the Imperial ..

The Tokyo Imperial Palace, is the home of The Emperor of Japan. It is a huge compound to relax in historical beauty and tradition..

The Daijokyu complex, which was built specially for Emperor Naruhito to perform a ritual marking his enthronement, is open to ..

The East Gardens of the Imperial Palace

The cherry blossoms at Tokyo's Imperial Palace bloom from late March to early April. Strolling through the grounds of the former..

Toyo's Imperial Palace is famous for cherry blossoms, especially along Inui-mon Street in March and April when it is open to..

Free Tour of the Imperial Gardens

The most affordable way to spend an afternoon learning about Japan’s imperial history.

The Chidorigafuchi Trench is one of the best places in Tokyo to see the cherry blossoms in spring, from late March to early April. This 700-meter walk..