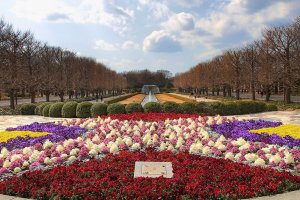 The Showa Kinen Park or Showa Memorial Park extends over the districts of Akishima and Tachikawa and is the largest park in Tokyo with its almost 1.7 km². During World War II, the place functioned as an air force base and was administered by the USA after the war In 1977 the site was returned to the Japanese government and part of it was converted into a park to commemorate the Emperor of Showa.

The Showa Kinen Park offers the possibility to rent bicycles at the entrance and has an 11km long bicycle route. There is also a lake with rowing boats, small stalls for snacks and drinks and barbecue areas.

The park is particularly popular in autumn, when the leaves change color and you can walk through a corridor made of gold-colored ginkgo trees, and in spring when the cherry blossoms are in bloom. The many lawns between the cherry trees offer the opportunity to have a picnic there for hanami. In winter, parts of the park are lit for Christmas.

The Showa Memorial Park is the perfect weekend place to spend time with your family. Here's a glimpse of what awaits you!

Showa Kinen, a large park just a short walk from JR Tachikawa Station, is one of the first places in the Tokyo region to see fall..

There are plenty of reasons to visit Japan during summer and the abundance of firework displays is one of them! Originally used..

Every year, a huge number of visitors -- both locals and tourists -- flock to the Showa Kinen Park in Tachikawa City, a huge multi-purpose..

Showa Kinen Park was established to commemorate the 50th anniversary of Emperor Showa's reign. A pleasant place to stroll, check..

163 hectares of pure contact with Mother Nature. Japan never ceases to amaze with its beautiful parks, and this may be one of the..

Say good-bye to summer in the company of 70,000 cosmos flowers.

Along with the famous gingko tree tunnel, one of the highlights of autumn at Showa Kinen Park are the cosmos flowers that grow in..

To celebrate all things fall, Showa Kinen Park is hosting an autumn light up event where visitors can appreciate the changing colors..

Head to the adult sanctuary at Water Hotel S and relax away from the busy Tokyo life.

To satisfy your cravings for Korean cuisine, try Kusa No Hana at Granduo, just a few strides from Tachikawa Station.

Cafe Bar Foret is a small pleasant Italian cafe and restaurant in Mori Town in Fussa City in the western part of Tokyo.

Want to up the ante on your regular melon pan? At The World's Second Best Melon Pan, you can do just that - they turn them into..

In 1993, the seven-acre Edo-Tokyo Open Air Architecture Museum was opened by the Tokyo Metropolitan Government as part of the Edo-Tokyo Museum. The aim..

Eric Carle is the author and illustrator of the iconic children's book "The Very Hungry Caterpillar". The Play! Museum in Tachikawa..