Saimyouji Temple has made a name for itself for being a LGBTQ+ friendly temple. Moreover, it is known and admired for being the second temple in all of Japan to openly promote and conduct same sex weddings. However, recently, it is attracting attention for its 'Demon Slayer' Kimetsu no Yaiba floral water font and display.

The Demon Slayer - Kimetsu no Yaiba - movie Mugen Train was released in Japanese cinemas on October 16th. It fast became the highest-grossing film in 2020 and the second highest grossing movie of all time in Japan. The movie is the sequel to the anime television series that aired in Japan last year. The tale of the Demon Slayer is based on the manga series by Koyoharu Gotoge. The manga have been translated into 14 different languages and enjoy great popularity abroad. The new movie Mugen Train will be released outside of Japan in early 2021.

Saimyou-ji Temple is located in the outskirts of Kawagoe, on the east side of the Kawagoe Aquatic Park. There is free parking for about 20 cars close to the temple.

By public transport: any bus bound for Kawagoe Aquatic Park "Kawagoe Suijo Koen", from Kawagoe Station, brings you within walking distance of the temple. 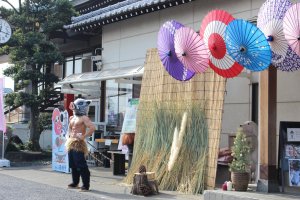 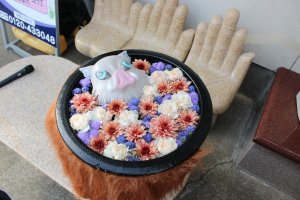 Sander van Werkhoven a month ago
I'm still baffled by the scale of the success of Kimetsu no Yaiba. It sure was a pretty good anime, one of the better series of last year (I haven't seen the film yet), but back then I never would have thought that it would go on and break almost every record there is. In the end to me it still felt like just a rather straightforward shonen story, elevated to great heights by the wonderful production of Ufotable.

But it is fun to see how this (in itself pretty interesting) temple incorporates elements of the series in a creative way. And about that Inosuke dude, seems like a rather chilly outfit for the time of the year :-)
Reply Show all 1 replies

Lynda Hogan Author a month ago
Haha! Yes, I imagine he was very cold. He went indoors for 5 minutes every 20 minutes or so. He's lucky he wasn't in Niigata or any of the other places hit with heavy snow recently!

I too am surprised by the success of Kimetsu no Yaiba. The hype had just started to ease off from the series last year when this film hit and now the hype is higher than ever!
Reply

Elizabeth S a month ago
Kimetsu no Yaiba, Demon Slayer, is fascinating. This is the first time in a long time that my imagination has been captured by animation.

Saimyouji's cool factor, considering their respect for LBGTQ+ community and embracing this manga/animation, is through the roof. Nice.
Reply Show all 3 replies

Lynda Hogan Author a month ago
And it gets better... the priest is well known for raising awareness about various societal issues. And he is hands on at raising funds for those in need. Right now, they are collecting Christmas treats for kids from disadvantaged families. I really respect the priest and all his endeavors for the community.
Reply

Bonson Lam a month ago
It is fascinating the people you meet and how you weave them into this article. Looking forward to reading more about their stories.
Reply

Lynda Hogan Author a month ago
I am a big fan of this priest, he's really something else. He may well end up featuring in another post. :D
Reply
6 comments in total