The biggest and most popular wolf shrine, Mitsumine

Sacred Wolves were lost to us long ago but are still worshipped in Japan. Wolves are predators of herbivores which damage rice and crops from the field, and thus were long regarded as a good animal and deified as wolf gods by the Japanese people until the government decided to change direction toward Westernization and Modernization in the late 19th-early 20th century.

The wolves may have been regarded as vicious evil creatures in the way they were described in fairy tales such as "Little Red Riding Hood", "The Boy Who Cried Wolf", "The Three Little Pigs", and many more stories from the West.

"Ookami", the Japanese word for "Great God", is a homonym with a word that means "wolf". In fact, prior to Emperor Meiji's ascension to the throne in 1867/68 which started the Meiji era (1868-1912), the wolf had long been worshipped as a divine messenger or the deity itself called "Ooguchi-no-Magami（大口真神） meaning a god of a big mouth", for harvest, fire and theft protection, breaking off bad relationships, marital harmony, and fertility by people especially in Edo, the former name of Tokyo.

However, the Meiji government, which aspired to quickly modernize and westernize, labeled wolves as creatures unfit for Western civilized society, and so encouraged hunters to kill off the wolves that once roamed all over the country. Millions of wolves were killed and thus went extinct in the early 1900s.

Now a simple question comes to my mind: why did those who once prayed to the wolf gods at the shrines do a flip-flop? I mean why weren't there any significant protests against killing wolves? Yes, it might be true that those wolf worshipers could have faced the risk of losing their own lives.

But wolf worship started back in the 2nd century A.D. when Legendary Prince Yamato Takeru lost his way in the mountains and was thrown into despair. A white wolf suddenly appeared in front of him, helped guide and lead him out of the deep forest, and saved his life. The Prince deeply appreciated the help of the white wolf, and after that many shrines were constructed dedicated to the wolf gods of the mountain "Ooguchi-no-Magami".

In addition, Prince Yamato Takeru is one of the original great ancestors of Emperor Meiji! So why didn't people use the roots of wolf worship to convince the Meiji government to reverse wolf-killing policy? The Japanese are thought to be inherently obedient to authority. However, I found the fact that during the same period, there was furious protest against railroad constructions by nearby residents, who forced the government to change those construction projects. Ironically and sadly, track construction outweighed the importance of God.

One other explanation might be that wolf worshipers were in a relative minority and so couldn't speak out loudly as the proverb explaining the Japanese culture goes "The nail that sticks up gets hammered down". This might explain it, but no one knows.

Despite the drop int the status of wolves, shrines associated with wolf worship are increasing in popularity today. Mitsumine Shrine (三峯神社) standing at the summit of Mt. Mitsumine in Oku-Chichibu, founded by Prince Yamato Takeru 1900 years ago, is arguably the most popular destination, with its stunningly beautiful mountains, peaceful and sacred spiritual atmosphere, astonishing work of intricate carvings on its buildings, and easy access from Tokyo.

Take the Seibu Line " the Red Arrow Limited Express" at Ikebukuro Station, 20 minutes away from Tokyo Station by train, which directly takes you to Seibu Chichi station; the foot of Mt. Mitsumine in just one and a half hours from Ikebukuro Station. From Seibu Chichibu Station, get on a Seibu bus for Mitsumine Shrine which takes about 70 minutes.

Once you get off at the final stop called Mitsumine Shrine, climb up the stairway, turn left and follow the main pathway leading to the popular highlights of Mitsumine Shrine: the Torii Gate, Zuishinmon, sacred trees, Haiden (The hall of worship), and Enmusubi (Marriage) trees.

It is said that writing a loved one's name or the name of someone you wish to love on a piece of paper available at a small shrine under the Marriage Trees, then praying for a good marriage, and placing it in the wish box will make your prayer come true.

When you walk past the Marriage Trees, there is then Ocarina Shrine (お仮屋) where rituals for the god of the wolf (Ooguchi-no-Magami) who is believed to live deep in the mountain are performed on the 19th of every month.

There are some less popular but authentic places you shouldn't miss:

When you decide to visit Okumiya, be cautious of bears. The chance of encountering a bear is low but make sure that you wear bear bells before entering the 1st Torii.

Upon entering the 1st Torii, the track gradually ascends and becomes steeper with every step. Continue heading uphill along the track.

This is the final but hardest part before reaching Okumiya shrine. A chain runs aside the stairs to help you climb up. It's about a 30-minute walk from the 4th Torii.

At Okumiya Shrine, you'll be rewarded with a great view of mountains as well as an atmosphere to feel the presence of the wolf gods.

Find out more about Mitsumine Shrine. 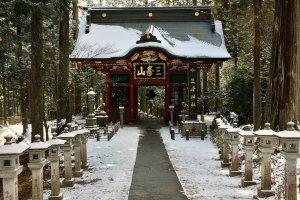 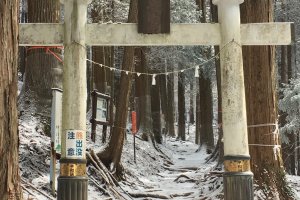 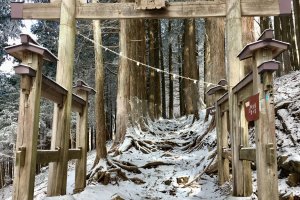 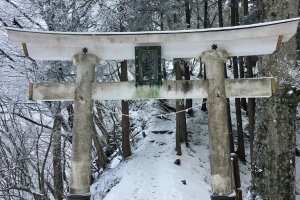 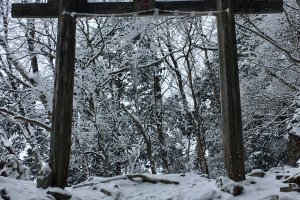 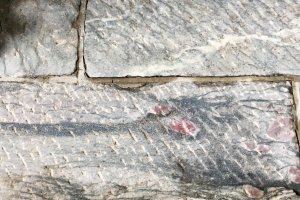 Justin Velgus a year ago
I love when you get to hear multiple myths and reasons to what happened long ago. Some points are more believable, but there is enough wiggle room to pick the reason I want to believe!
Reply Show all 0 replies

Cathy Cawood 4 years ago
Thank you for your interesting article. I visited Mitsumine Shrine in summer. It is a beautiful and interesting place, and I wanted to know more about it. Your photos of the shrine in snow are wonderful too.
Reply Show all 0 replies

Sleiman Azizi 4 years ago
Your photos have sold me. I'm going the next chance I get...
Reply Show all 0 replies

Elizabeth S 4 years ago
Excellent insight into the hidden history of human beings and lost wolves! When next I'm in Chichibu, I'll see Mitsumine Shrine with a fresh perspective.
Reply Show all 1 replies

Hiroyuki Akaishi Author 4 years ago
Thank you Kim! Yes, this heat wave is making me miss winter too.
Reply
9 comments in total