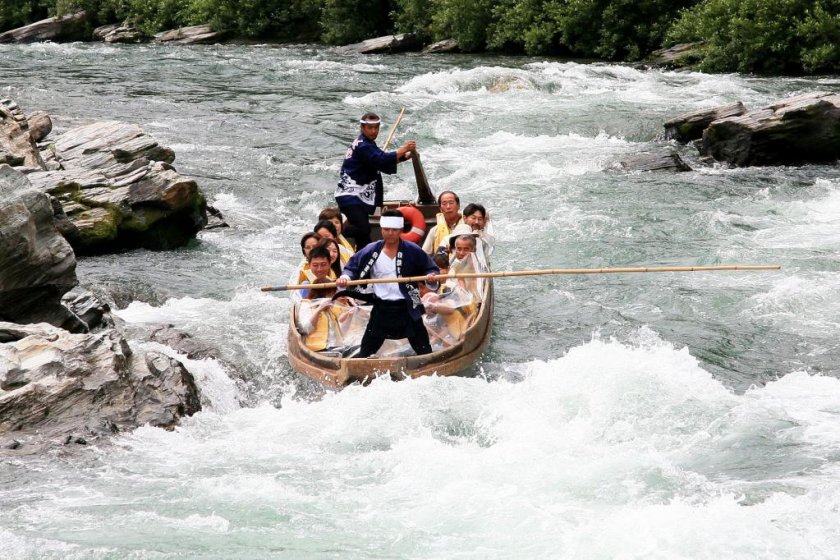 Not for the faint of heart (Photo: Nagatoro Tourist Information)

Many visitors to Nagatoro in Saitama come for one reason – the chance to ride the rapids down the Arakawa river.

For those wishing to take to the beautiful green-blue waters of one of Saitama’s most important rivers in a traditional wooden boat, all managed by a pair of sturdy local boatmen, there are three options; the aptly named A, B, and C courses.

The A, and B courses are essentially the ‘C’ course divided by two with the A course starting at Oyahana Bridge around 20 minutes to the south, and upstream of the main River Boating Center which is adjacent to the intriguing local rock formation known as Iwadatami; a slate like structure carved over millions of years by the waters passing around it and great place to sit and just watch the waters pass by if you have time before or after you go ‘messin’ about on the river’.

Oyahana Bridge is reached by way of a free shuttle bus from the Iwadatami area, with passengers riding a series of rapids and calmer areas of water until they reach Iwadatami. This is the same point from which boats on the B course depart, traveling a similar distance downstream and north until they put in at the Takasago Bridge.

The C course is longer – linking Oyahana Bridge with Takasago Bridge in one fell swoop taking twice the time and with the potential to get twice as wet – but also offering twice the fun.

On both courses, the area of rapids varies in terms of white-water and ‘splash-factor’ depending on recent weather conditions that may have affected the river. On days when it is considered dangerous, the decision will be made not to run the boats as safety always trumps profit.

All boats are equipped with life jackets and the proper wearing and zipping up of these jackets is required – with no exceptions. A thick, clear plastic liner along the side of the boat can be lifted to cover much of the head and torso plus any bags when required and you will always be given a heads-up by the boatmen when this is required.

Along the way, in areas of calmer water do take the chance to snap some of your own photos as the rivers in the Kanto area this pristine, this clear and lined with the rock formations that have for so long guided the course of the Arakawa are few and very far between.

Watch the boatmen as they handle their long bamboo shafts with great skill, punting when needed, pushing the craft away from rocks at other times, and always always always keep an eye on the boatman at the front. When he lowers his head and crouches down, the waters are getting rougher. He doesn't want to get wet, and if you follow his lead you won’t either.

NB: On both legs professional cameramen will be on the banks at strategic points to shoot the boats passing; photos available later for those who want them. 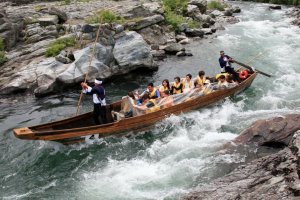 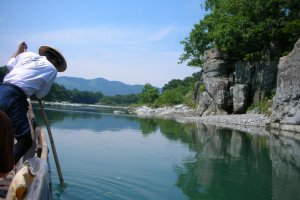 Elena Lisina 3 months ago
I'd like to try some day! Thanks for the information!
Reply Show all 0 replies