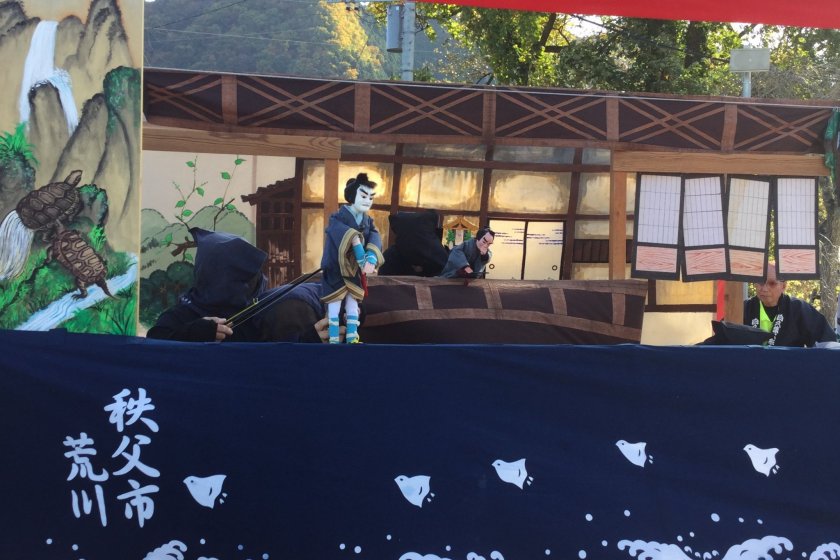 Each puppet is animated by two people.

Once a year, we treat ourselves to the best soba one could possibly have in a year at the Chichibu Shin-soba Festival. At ¥500 for a serving of zaru soba, cold soba with dipping sauce, we enjoy some of the sweetest, most flavorful soba we will ever taste in a year as the soba dished out at the matsuri is made from newly harvested buckwheat flour.

This year, we arrived early enough to get our soba, browse the booths, and sit down to enjoy the stage shows, one of which is a puppet show performed by the Shirakukushi Puppet Show Preservation Society (白久串人形芝居保存会). This type of skewer puppet show began towards the end of the Edo Period to the early Meiji Period. The early troupes performed at temple and shrine festivals but later suspended due to the advent of moving pictures. A group of local volunteers revived the shows in 1927 and continue to perform to this day.

Before the show, the artists showed the audience how the puppets were manipulated by two people -- one controls everything related to the head, including minute movements of the eyebrows and the mouth, while the other controls the arms and hands. Both people have dark head coverings and see through a net so the audience can focus their attention on the dolls. The Shirakushi troupe performs outdoors for this festival, which is a challenge in strong winds and bright sunlight, but the openness was also an opportunity to appreciate how many people it takes to put up a show (I counted 10 people behind the scenes when there were only two puppets on stage).

Unlike a more elaborate bunraku, the Shirakushi troupe relies on music and narration played over tape. The language may be a bit difficult to understand because old Japanese is used and the tales come from the Edo Period. But the skill required to effectively execute this visual art can hold your attention.

Catch this free performance of a traditional art at the yearly shin-soba festival in Chichibu.

Take the Seibu Chichibu all the way to Seibu Chichibu, the end of the line. From the station, there are free shuttle buses that will take you to the festival grounds. Shuttle buses come in 20 minute intervals and the ride is about 20 minutes long. Some people opt to drive to the festival grounds but finding parking might be difficult so I highly recommend going by train. 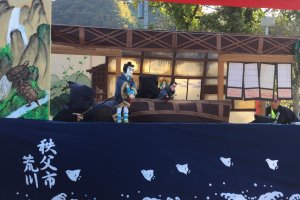 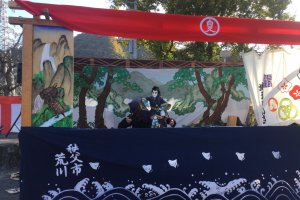 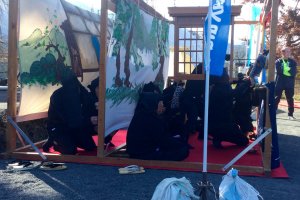 Elizabeth S a year ago
Wow, this is one of those rare performances that are so special to see. I've seen kamishibai, the precursor to animation, but this is so cool with a huge crew of puppeteers. When does this happen?

Sleiman Azizi a year ago
You had me with the soba. The theatre is a bonus!
Reply Show all 0 replies
2 comments in total