Otsu is aptly named Holy Land, because it is where the Tendai sect of Buddhism originated. This is evident even today in the temples and shrines that abound here. Training in the ascetic arts still carries on in these temples, perpetuating Otsu’s religious legacy through centuries. The most famous of these on land is Enryakuji on Mt Hiei.

But the waters of Lake Biwa are the centerpiece. Imbued with holiness, they are the centrifugal force behind a Water Heritage philosophy where faith and lifestyle converge, venerated for cleansing and protection against evil. Many temples are situated facing Lake Biwa, the closer the better. Ishiyamadera is right next to Lake Biwa, giving it extra “power”.

As I understand it, reverence for Biwa combines both Shinto and Buddhist beliefs, which is nothing unique, as this dualism seems almost ubiquitous in Japan’s temples and shrines. Shintoists believe that spirits dwell in the water, and sacred rites are held to honor the Lake as a God. For Buddhists, Biwa draws its holy power and force from Mt Hiei where the Buddha Of The Pure Land resides, prayed to for protection against calamities and illness. Who doesn’t need a bit of protection these days? Whatever your religion, even if you have none, Lake Biwa exudes a peace, a gentleness, a feeling of "don’t worry, everything will be all right". For a single traveler, this is mighty comforting.

All my photos of Lake Biwa whether taken on a cloudy day or in bright sunshine, seemed tinged with blue. Then I read that the Buddha Of The Pure Land is blue colored, lapis lazuli, to be exact. So Lake Biwa, too, shines blue.

Lake Biwa is Japan’s largest lake, covering 670 square kilometers. It is also over four million years old. And I thought I was old. 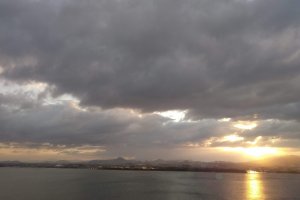 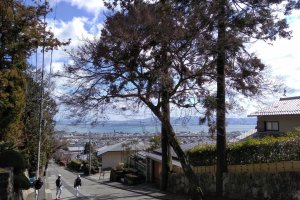 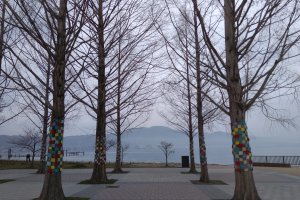 Sleiman Azizi a year ago
Tinged in blue... has a nice ring to it.
Reply Show all 0 replies

Kim a year ago
I've only visited Lake Biwa once - I had no idea that it had been around for 4 million years! Incredible!
Reply Show all 0 replies
2 comments in total