Although a small countryside town, Tsuwano has festivals with a few hundred years of history. The most important of them is the Heron Dance in July.

Performed on the same date every year, it draws a big crowd of spectators. As the most important ceremony of the year, the townsfolk come out of their homes, some shops close for the time of the dance, and even the school closes during the early afternoon (if the festival is on a weekday). While it would be easy to move the festival's date to a weekend, the locals take pride in preserving the ceremony as it was, thus sticking to the old dates of 17 and 20 July. (7 and 14 in the old lunar calendar).

Watching the ceremony, the shining white feathers of the heron costume exudes pureness and cleanness. The crowed is silent during the dance; one's ears are concentrating on the chanting, the music and the clicking of cameras. There is also a charming children's performance, which preserves the traditional parts of the dance. There are a lot of spectators despite the hot weather in July, and one has to be careful not to get a heatstroke.

The Heron Dance is originated from Kyoto’s Gion festival and was introduced to Yamaguchi’s Ouchi clan first, and then to Tsuwano in 1542 by the Yoshimi clan. While the ceremony was discontinued in Kyoto and Yamaguchi, the people of Tsuwano kept it alive for the past 470 years. The only time Sagi-mai was not performed, was when the Sakazaki clan wanted to erase the previous domain ruler, Yoshimi clan's, customs. The Sakazaki clan was in power for a short time from 1601 to 1616, and the following Kamei clan reintroduced the dance in 1643.

Kosagi-mai, or young heron dance, started some 60 years ago, to let children experience local traditions from an early age. Elementary school students dress up in a cute version of the heron costume, and perform a modified dance. There is a male heron with the beak open, and a female heron with the beak closed, indicating that the dance is a mating dance. The herons are believed to protect from illnesses and dieses. There are also two men in red wigs carrying long staffs in their hands, fending off demons and ghosts.

The rest of the procession comprises musicians and two dancing figures of yet unknown role. The wings are made of wood, and its clicking sound is incorporated into the music as an instrument. This makes it heavy, about 12-15kg for the feathers and another 3kg for the bamboo head piece.

The festival starts around 15:00 at the Yasaka Shrine, where the deity lives. On 20 July, the ceremonial dance is performed at 10 locations in the town, starting from the shrine, going to the place where the palace was standing (now Tsuwano High school) and onward to the former merchant town. The final destination is the Otabisho, the temporary resting place of the deity. One week later on the 27th, the deity returns to the shrine taking the same route backwards.

Recently, the first dance is performed in front of the community hall in the Old Town part of Tsuwano, where the preparations begin. The Young Heron dance starts earlier, around 13:00, and goes around the same route as the Heron dance.

Tonomachi street and Yasaka Shrine are the best places to see the Heron dance with a lot of locals and visitors around. Yasaka Shrine is about a 15 minutes walk from the station. Walking on the main road, when reaching the crossing with the traffic light and the bridge over the river, the shrine is going to be on the right, going through the torii gate (not crossing the river).

Tonomachi stret is the center of Tsuwano, with koi fish swimning in the waterways, and the town hall's more than a hundred years old building in the second retainers mansion. It is about 10-15 minutes from the station. 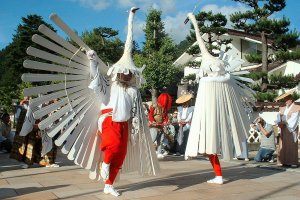 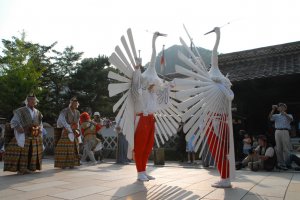 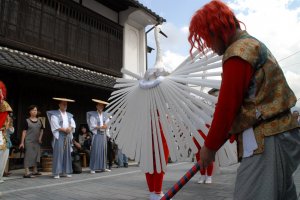 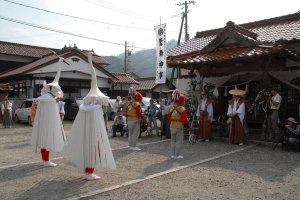 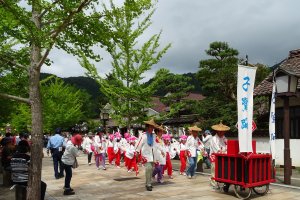 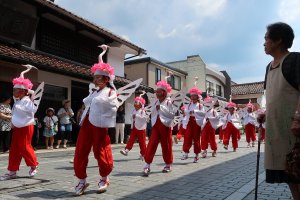