Shrine of the Tsuwano domain, origin of the heron dance

Yasaka Shrine is a small but important shrine in Tsuwano Castle town in Shimane Prefecture. It is about 20 minutes from the station, and only 5 minutes from other important sightseeing spots like the water-ways filled with koi carp, at Tonomachi street. The shrine has a long history. It was rebuilt after the fire of 1853, but the first shrine on this spot was built much earlier, in 1660. Now, it is on the path from the old town towards the stairway and 1000 torii gates leading up to the famous Taikodani Inari Shrine. The grounds of the shrine are next to the river, and the location is a pleasant short rest during sightseeing.

During the night, the lanterns leading to the shrine (and up to the Taikodani Inari Shrine) illuminate the way, which gives it a pleasant, antique atmosphere. This atmosphere comes not just because the illumination from laterns, but also because the colour of the light is soft and warm, unlike the usual street lights.

The Gion festival of Tsuwano has a traditional dance called Heron Dance (sagi-mai), which has been performed every year for over 475 years. The festival and dance starts from this very shrine, on the 20th of July, and the end on the 27th of the same month.

The circle in front of the shrine is made of straw or thatch, and it is the main piece of a Shinto ritual called the Wakuguri ritual (輪ぐり神事 wakiguri-shinji). This ritual symbolises the start of the summer festivals. By passing through the knitted wheel, one purifies one's soul and body, making one strong against the summer disease and illnesses. It is performed on the 30th of June. Originally there was a similar ritual at the end of the year, but not many places continued the winter ritual. The name of the summer ritual is Nagoshiharae (夏越の祓), which in direct translation means "overcoming the summer", and Wakuguri is just one part of the whole ritual..

Mame-chishiki means "small trivia." There are hidden stories in Yasaka-shrine, which you might not realize, unless told. For example, there is a stone that looks like nothing special (see photos), but it is indeed a o-hyaku-do-ishi (お百度石). In the past, it was used during a prayer called o-hyaku-do mairi (お百度参り), which means "going to the shrine 100 times" or "praying 100 times".

The person, who had something big to ask from the gods, would come to the shrine, and pray 100 times. In this alcove, there was a horizontal bar, with small movable stones on it. In order not to forget how many times one already prayed, after every prayer one would walk back to the stones, and move one, until the 100th stone. Also, since one can not talk during this prayer, not even between the prayers, usually they would come early in the morning, or before sunrise, when there was no one else around. 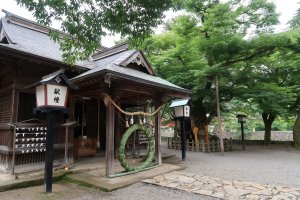 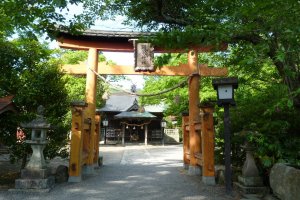 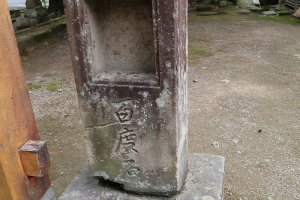