Tsuwano has a crystal clear river that is ideal for 'Washi' paper making, 'Wasabi' growing and sake brewing. Tsuwano has 3 long-established breweries. One of these is the Furuhashi (古橋 - old bridge) brewery on the main street. This brewery has been making sake for more than 130 years yet, while taking pride in preserving this tradition they have also embraced change. This has resulted in many new types of sake being created, (like sparkling sake) offering a new taste and experience for the customer.

When talking to the owner, I learnt that there are 4 special ingredients that are needed to make good sake.

The first one is clear water. In Tsuwano, the spring water of the Takatsu River, which has been nationally recognized for its quality (awarded the cleanest river in Japan 4 times in a row between 2010 and 2014), helps to contribute to the rich flavor of this drink.
The second important ingredient is the rice, which is grown in the valleys of the Takatsu river. The Sakanishiki rice is selected because of its sweetness, which echos in the deep flavor of the sake.

The third most important "ingredient" is good weather, for sake at least, as the temperature is close to or below zero degrees throughout the whole brewing season. This is thanks to the surrounding high mountains that create an ideal place to make good sake, by keeping the fermentation process in control.

Finally, last but not least, is the tradition involved; as in the preserved way of making the sake or fermented drink that was first created by this brewery's founder, Yataro Furuhashi. One of the first drink's produced by this brewery was given the name Uijin, meaning first battle. This was named after the fact that Yataro Furuhashi participated in a decisive battle in 1868 when he was only 17 years old. Because of this name, Uijin Sake is usually given as a present to people who are starting something new in their life, like a new job or getting married.

Except during the peak-time of sake brewing (from January to February), the owner will usually show people around the brewery. However, please note that some Japanese language skills are needed!

Interestingly, many parts of this sake production is still done by hand. This includes the washing and steaming of rice while spreading the Kouji, (the mold grown on the rice which forms the first part of the sake making process). Much of the bottling process is also still done by hand. The building sake-gura (sake warehouse, also meaning sake brewery) was built in 1878, while the adjacent shop was constructed in 1921. Both of these buildings are Registered Tangible Cultural Properties. The sake-gura is 72 meters long, stretching all the way to the other side of the block.

When entering the manufacturing area, look out for the dragon on the right, it is quite a masterpiece. The shop offers a variety of different sake types, and even biscuits and ice-cream made from the remaining rice after the pressing process (called kasu). Visitors can even taste some different types of drinks to help them decide which one they like the best. The shop also boosts a variety of Anpanman branded items. Tsuwano Town was twinned with Berlin's Mitte district as a sister-city. Part of this cooperation is aimed at developing and exchanging these branded products.

Local sake is also produced in the similar traditional Kasen and the Zaima breweries.

The Furuhashi Sake Brewery is on the main road of Tsuwano called Hon-machi street. The brewery about 10-15 minutes walking distance from the station, half way from the station to the old samurai district. 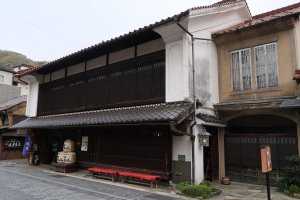 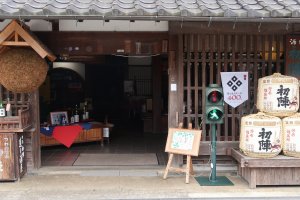 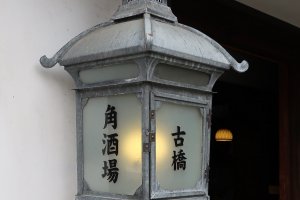