Feel the deep, pleasant silence at a thatched roof temple

Youmeiji temple (永明寺｜ようめいじ) is a thatch roofed temple 15 minutes from Tsuwano station and 10 minutes from the old town center. I visited in early summer, and it was refreshing that after walking up the stairs leading to the temple, I felt a cool breeze coming from the tall trees and thick forest. One enters through a tall gate, unusual to temples, rightly so, as I later learned. The gate, with the earthen walls, used to be the border between the merchant town and the samurai residents, where ordinary people without samurai rank were stopped. It was moved to the temple during the modernization of the town.

One feeling that struck me is the silence. Not too many visitors come here, and those who do, are only in small groups of 2 or 3. This silence gives the weary travel a chance to relax.

The thatched roof is rather old, with moss and small plants in it. It may need replacing soon. The garden behind the temple is definitely worth visiting; small but quite beautiful.

The temple was built in 1420 by the Yoshimi-clan and was the family temple of all the domain lords up till the Meiji restoration (1868). The official name was Sekishu Honzan Youmeiji, now called Kakuouzan Yomeiji.

The graveyard in front of Youmeiji is the final rest place of a few historical figures of Tsuwano, or rather from Tsuwano. Ogai MORI is one of them, a leading writer of the Meiji period and a Surgeon General of the Army. Another graveyard can be found near the entrance of the temple, that of the Kamei-clan, the domain lord of Tsuwano Domain from 1618 to 1871.

Mame-chishiki: Small trivia of the day

The hollow fish sculpture functioned as the clock, or schedule alarm for the priests, telling them when the dinner or prayer starts. It barely has any sound, so it won't disturb the monks, and since fish don't have the same kind of eyelids as humans, it was believed that the fish is watching the monks without even blinking. 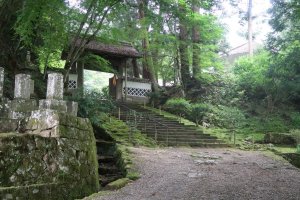 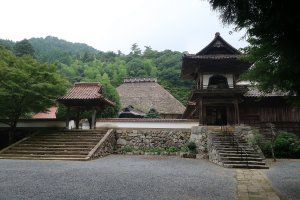 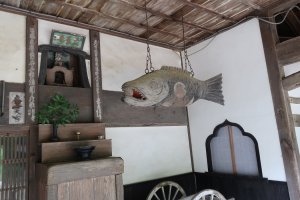